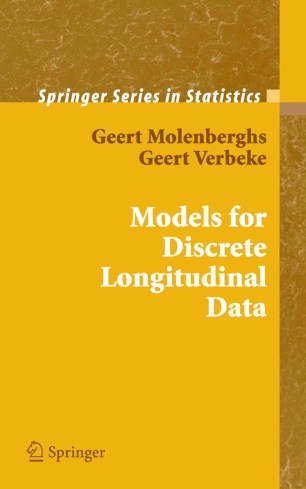 This book provides a comprehensive treatment on modeling approaches for non-Gaussian repeated measures, possibly subject to incompleteness. The authors begin with models for the full marginal distribution of the outcome vector. This allows model fitting to be based on maximum likelihood principles, immediately implying inferential tools for all parameters in the models. At the same time, they formulate computationally less complex alternatives, including generalized estimating equations and pseudo-likelihood methods. They then briefly introduce conditional models and move on to the random-effects family, encompassing the beta-binomial model, the probit model and, in particular the generalized linear mixed model. Several frequently used procedures for model fitting are discussed and differences between marginal models and random-effects models are given attention

The authors consider a variety of extensions, such as models for multivariate longitudinal measurements, random-effects models with serial correlation, and mixed models with non-Gaussian random effects. They sketch the general principles for how to deal with the commonly encountered issue of incomplete longitudinal data. The authors critique frequently used methods and propose flexible and broadly valid methods instead, and conclude with key concepts of sensitivity analysis.

Without putting too much emphasis on software, the book shows how the different approaches can be implemented within the SAS software package. The text is organized so the reader can skip the software-oriented chapters and sections without breaking the logical flow.

Geert Molenberghs is Professor of Biostatistics at the Universiteit Hasselt in Belgium and has published methodological work on surrogate markers in clinical trials, categorical data, longitudinal data analysis, and the analysis of non-response in clinical and epidemiological studies. He served as Joint Editor for Applied Statistics (2001–2004) and as Associate Editor for several journals, including Biometrics and Biostatistics. He was President of the International Biometric Society (2004–2005). He was elected Fellow of the American Statistical Association and received the Guy Medal in Bronze from the Royal Statistical Society.

Geert Verbeke is Professor of Biostatistics at the Biostatistical Centre of the Katholieke Universiteit Leuven in Belgium. He has published a number of methodological articles on various aspects of models for longitudinal data analyses, with particular emphasis on mixed models. Geert Verbeke is Past President of the Belgian Region of the International Biometric Society, International Program Chair for the International Biometric Conference in Montreal (2006), and Joint Editor of the Journal of the Royal Statistical Society, Series A (2005–2008). He has served as Associate Editor for several journals including Biometrics and Applied Statistics.

The authors also wrote a monograph on linear mixed models for longitudinal data (Springer, 2000) and received the American Statistical Association's Excellence in Continuing Education Award, based on short courses on longitudinal and incomplete data at the Joint Statistical Meetings of 2002 and 2004.