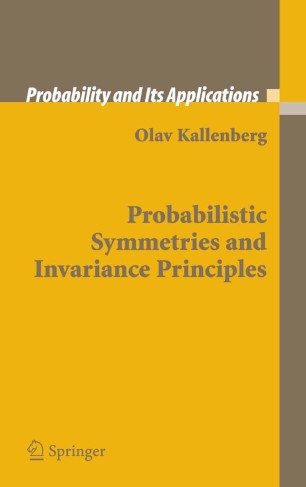 Part of the Probability and Its Applications book series (PIA)

This is the first comprehensive treatment of the three basic symmetries of probability theory—contractability, exchangeability, and rotatability—defined as invariance in distribution under contractions, permutations, and rotations. Originating with the pioneering work of de Finetti from the 1930's, the theory has evolved into a unique body of deep, beautiful, and often surprising results, comprising the basic representations and invariance properties in one and several dimensions, and exhibiting some unexpected links between the various symmetries as well as to many other areas of modern probability. Most chapters require only some basic, graduate level probability theory, and should be accessible to any serious researchers and graduate students in probability and statistics. Parts of the book may also be of interest to pure and applied mathematicians in other areas. The exposition is formally self-contained, with detailed references provided for any deeper facts from real analysis or probability used in the book.

Olav Kallenberg received his Ph.D. in 1972 from Chalmers University in Gothenburg, Sweden. After teaching for many years at Swedish universities, he moved in 1985 to the US, where he is currently Professor of Mathematics at Auburn University. He is well known for his previous books Random Measures (4th edition, 1986) and Foundations of Modern Probability (2nd edition, 2002) and for numerous research papers in all areas of probability. In 1977, he was the second recipient ever of the prestigious Rollo Davidson Prize from Cambridge University. In 1991–94, he served as the Editor in Chief of Probability Theory and Related Fields. Professor Kallenberg is an elected fellow of the Institute of Mathematical Statistics.