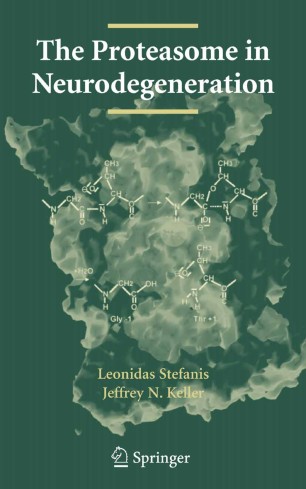 The Proteasome in Neurodegeneration

"Protein degradation, especially via the ubiquitin-proteosome system, has emerged as a critical molecular component to mechanisms of cell death in a variety of prominent neurodegenerative diseases. Thus, the editors of this book should be praised for the comprehensiveness and timeliness of their effort. In this single volume, the reader will find a mixture of valuable information regarding the ubiquitin-proteosome machinery ranging from the most basic to the most clinically-relevant. The book also provides insightful comments and views on the complex question of ubiquitin-proteosome
in neurodegeneration by well-respected experts, which enrich this volume with many balanced opinionsand a scientific honesty rarely found in these types of books. It is unquestionable that this publication would be an asset to any neuroscientist and clinician alike."

Impaired function of the ubiquitin-proteosome system (UPS) has long been implicated as a contributing factor in various neurodegenerative diseases. In fact, the presence of various ubiquitin-decorated protein aggregates is pathonumonic for many such diseases. Unfortunately, this system was sorely neglected until the recent association between several genes, encoding UPS-related proteins, and Parkinson’s disease placed UPS dysfunction center stage in the neurodegeneration field. With increasing interest in this fast growing area, this book represents a timely and critical effort summarizing the most exciting development to date by many renown experts in the field. With a thoughtful and useful structure, the book takes the reader from a detailed introduction of the UPS system, through an elegant discussion of the relationship between UPS and critical cellular functions to an outstanding summary of the UPS in various neurodegenerative diseases. As such, this book serves equally well to both those who are new and those who are knowledgeable to the field. There is no doubt that this book will generate ever more interest in this fertile research area.

This is excellent timing! The role of the ubiquitin proteasome system in neurodegeneration is a hot topic, and recent research has shown that this system plays a role in various neurodegenerative diseases, such as Alzheimer’s disease, Parkinson’s disease and Huntington’s disease.