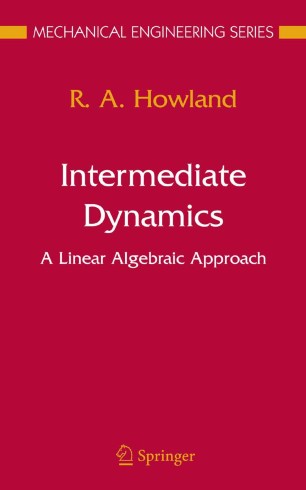 As the name implies, Intermediate Dynamics: A Linear Algebraic Approach views "intermediate dynamics"--Newtonian 3-D rigid body dynamics and analytical mechanics--from the perspective of the mathematical field. This is particularly useful in the former: the inertia matrix can be determined through simple translation (via the Parallel Axis Theorem) and rotation of axes using rotation matrices. The inertia matrix can then be determined for simple bodies from tabulated moments of inertia in the principal axes; even for bodies whose moments of inertia can be found only numerically, this procedure allows the inertia tensor to be expressed in arbitrary axes--something particularly important in the analysis of machines, where different bodies' principal axes are virtually never parallel. To understand these principal axes (in which the real, symmetric inertia tensor assumes a diagonalized "normal form"), virtually all of Linear Algebra comes into play. Thus the mathematical field is first reviewed in a rigorous, but easy-to-visualize manner. 3-D rigid body dynamics then become a mere application of the mathematics. Finally analytical mechanics--both Lagrangian and Hamiltonian formulations--is developed, where linear algebra becomes central in linear independence of the coordinate differentials, as well as in determination of the conjugate momenta.

o Complete proofs of all mathematical material. Similarly, there are over 100 detailed examples giving not only the results, but all intermediate calculations.

o An emphasis on integrals of the motion in the Newtonian dynamics.

o Development of the Analytical Mechanics based on Virtual Work rather than Variational Calculus, both making the presentation more economical conceptually, and the resulting principles able to treat both conservative and non-conservative systems.