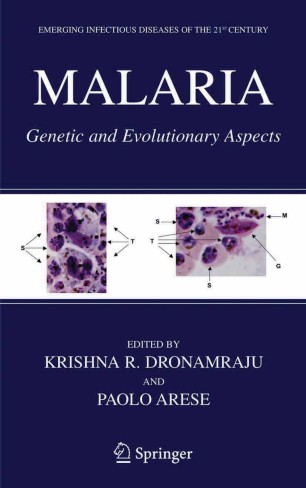 This book was originally conceived at a conference at the University of Turin in Italy. The conference was organized to examine the so-called “Malaria Hypothesis”, that is to say, the higher fitness of t- lassemia heterozygotes in a malarial environment, and to pay tribute to the proponent of that hypothesis, J.B.S. Haldane. Contributors to this book examine certain genetic and evolutionary aspects of malaria which is a major killer of human populations, especially in Africa and Asia. There were attempts to discredit Haldane’s contribution from two directions: (a) it has been suggested that the “Malaria Hypothesis” was known long before Haldane and that there was nothing original about his idea (Lederberg 1999), and that (b) the hypothesis of heterozygote su- riority was first suggested by the Italian biologist Giuseppe Montalenti who communicated his idea to Haldane (Allison 2004). Surely, both c- not be right. In fact, the evidence presented in this book clearly indicates that both are wrong. Haldane’s malaria hypothesis has stimulated a great deal of research on the genetic, evolutionary and epidemiological aspects of malaria d- ing the last 50 years. It has opened up a whole new chapter in the study of infectious diseases. It deserves serious consideration. For helpful discussions we thank Lucio Luzzatto, Alberto Piazza, Guido Modiano and David Roberts.