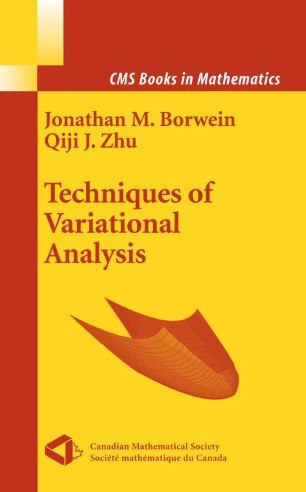 Variational arguments are classical techniques whose use can be traced back to the early development of the calculus of variations and further. Rooted in the physical principle of least action they have wide applications in diverse fields. This book provides a concise account of the essential tools of infinite-dimensional first-order variational analysis illustrated by applications in many areas of analysis, optimization and approximation, dynamical systems, mathematical economics and elsewhere. The book is aimed at both graduate students in the field of variational analysis and researchers who use variational techniques, or think they might like to. Large numbers of (guided) exercises are provided that either give useful generalizations of the main text or illustrate significant relationships with other results.

Jonathan M. Borwein, FRSC is Canada Research Chair in Collaborative Technology at Dalhousie University. He received his Doctorate from Oxford in 1974 and has been on faculty at Waterloo, Carnegie Mellon and Simon Fraser Universities. He has published extensively in optimization, analysis and computational mathematics and has received various prizes both for research and for exposition.

Qiji J. Zhu is a Professor in the Department of Mathematics at Western Michigan University. He received his doctorate at Northeastern University in 1992. He has been a Research Associate at University of Montreal, Simon Fraser University and University of Victoria, Canada.