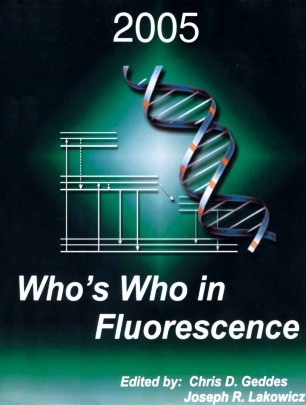 Who’s Who in Fluorescence 2005

The Who's Who in Fluorescence 2005 is the 3r volume of the Who's who series. The previous two volumes (2003 and 2004) have been very well received indeed, with many copies being distributed around the world, through conferences and workshops, as well as through internet book sites. In the last 2 years a great many of you have sent comments and suggestions, we thank you all. We have tried to accommodate many of these into the new 2005 volume. This new 2005 volume features some 382 entries from no fewer than 32 countries, an increase from 312 entries in the 2003 volume. In addition, we have a continued strong company support, which will enable us to further disseminate the volume in 2005. In this regard we especially thank the instrumentation companies for their continued support, where without their finical contributions; it is likely that the volume would not be the success it is today. We have introduced a new author publication statistic into this volume, the Author Impact Measure (AIM) number. While voluntary, this number is intended to reflect an author's progress in past years. The AIM number simply summates the impact number (from the ISI database) of Journals published in, in that year, multiplied by the frequency of those publications. From those who chose to participate, we can see most impressive AIM numbers, in some instances, greater than 80 for an individual year.