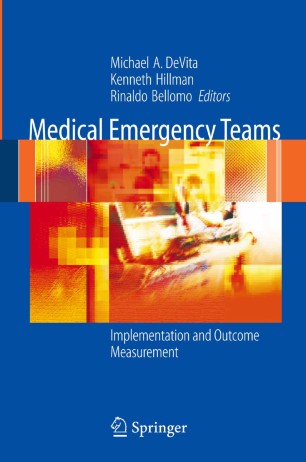 Why Critical Care Evolved METs? In early 2004, when Dr. Michael DeVita informed me that he was cons- ering a textbook on the new concept of Medical Emergency Teams (METs), I was surprised. At Presbyterian-University Hospital in Pittsburgh we int- duced this idea some 15 years ago, but did not think it was revolutionary enough to publish. This, even though, our fellows in critical care medicine training were all involved and informed about the importance of “C- dition C (Crisis),” as it was called to distinguish it from “Condition A (Arrest). ”We thought it absurd to intervene only after cardiac arrest had occurred,because most cases showed prior deterioration and cardiac arrest could be prevented with rapid team work to correct precluding problems. The above thoughts were logical in Pittsburgh, where the legendary Dr. Peter Safar had been working since the late 1950s on improving current resuscitation techniques, ?rst ventilation victims of apneic from drowning, treatment of smoke inhalation, and so on. This was followed by external cardiac compression upon demonstration of its ef?ciency in cases of unexpected sudden cardiac arrest. Dr. Safar devoted his entire professional life to improvement of cardiopulmonary resuscitation. He and many others emphasized the importance of getting the CPR team to o- of-hospital victims of cardiac arrest as quickly as possible.