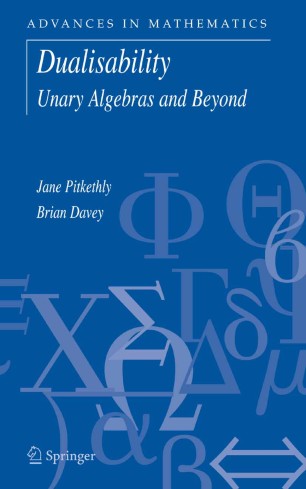 Unary Algebras and Beyond

Part of the Advances in Mathematics book series (ADMA, volume 9)

Natural duality theory is one of the major growth areas within general algebra. This text provides a short path to the forefront of research in duality theory. It presents a coherent approach to new results in the area, as well as exposing open problems.

Unary algebras play a special role throughout the text. Individual unary algebras are relatively simple and easy to work with. But as a class they have a rich and complex entanglement with dualisability. This combination of local simplicity and global complexity ensures that, for the study of natural duality theory, unary algebras are an excellent source of examples and counterexamples.

A number of results appear here for the first time. In particular, the text ends with an appendix that provides a new and definitive approach to the concept of the rank of a finite algebra and its relationship with strong dualisability.

This book is intended for established researchers in natural duality theory, general algebraists wishing to commence research in duality theory, and graduate students in algebra.