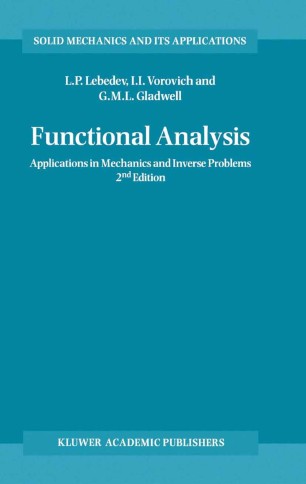 Applications in Mechanics and Inverse Problems

Part of the Solid Mechanics and Its Applications book series (SMIA, volume 100)

This book started its life as a series of lectures given by the second author from the 1970’s onwards to students in their third and fourth years in the Department of Mechanics and Mathematics at Rostov State University. For these lectures there was also an audience of engineers and applied mechanicists who wished to understand the functional analysis used in contemporary research in their fields. These people were not so much interested in functional analysis itself as in its applications; they did not want to be told about functional analysis in its most abstract form, but wanted a guided tour through those parts of the analysis needed for their applications. The lecture notes evolved over the years as the first author started to make more formal typewritten versions incorporating new material. About 1990 the first author prepared an English version and submitted it to Kluwer Academic Publishers for inclusion in the series Solid Mechanics and its Applications. At that state the notes were divided into three long chapters covering linear and nonlinear analysis. As Series Editor, the third author started to edit them. The requirements of lecture notes and books are vastly different. A book has to be complete (in some sense), self contained, and able to be read without the help of an instructor.