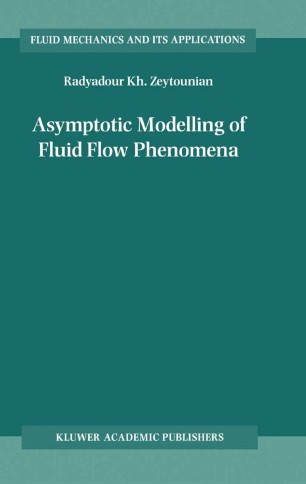 Part of the Fluid Mechanics and Its Applications book series (FMIA, volume 64)

for the fluctuations around the means but rather fluctuations, and appearing in the following incompressible system of equations: on any wall; at initial time, and are assumed known. This contribution arose from discussion with J. P. Guiraud on attempts to push forward our last co-signed paper (1986) and the main idea is to put a stochastic structure on fluctuations and to identify the large eddies with a part of the probability space. The Reynolds stresses are derived from a kind of Monte-Carlo process on equations for fluctuations. Those are themselves modelled against a technique, using the Guiraud and Zeytounian (1986). The scheme consists in a set of like equations, considered as random, because they mimic the large eddy fluctuations. The Reynolds stresses are got from stochastic averaging over a family of their solutions. Asymptotics underlies the scheme, but in a rather loose hidden way. We explain this in relation with homogenizati- localization processes (described within the §3. 4 ofChapter 3). Ofcourse the mathematical well posedness of the scheme is not known and the numerics would be formidable! Whether this attempt will inspire researchers in the field of highly complex turbulent flows is not foreseeable and we have hope that the idea will prove useful.