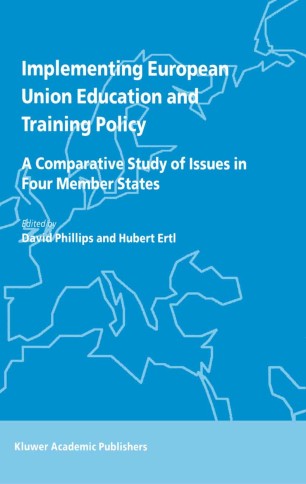 A Comparative Study of Issues in Four Member States

The papers which make up this volume have for the most part emerged from the work of a team of young researchers based for varying periods at the Department of Educational Studies of the University of Oxford as part of an international network funded by the European Union. The network, known as PRESTiGE (Problems of Educational Standardisation and Transition in a Global Environment), involves teams at six European universities, each of which can only employ young researchers from Member States other than that in which it is situated. The Oxford part of PRESTiGE has been concerned with the interpretation, transmission and implementation of European Union education and training policy in four Member States: France, Germany, Sweden and the United Kingdom. As the leader of the Oxford team I had the good fortune to work with young researchers from Denmark, Germany, Greece, Sweden and Portugal. Their work is included here. So too are contributions from Jake Murdoch (a member of the Dijon team, based at the Université de Bourgogne) and Professor António Nóvoa, the leader of the Lisbon team. Together the papers (which we have allowed to overlap to some extent, so that each one can be read independently) represent a genuinely international collaborative effort to understand the intentions and the effects of EU education and training policy, and we hope that they will contribute to further discussion of the important issues that those with an interest in European co-operation and development will wish to pursue.