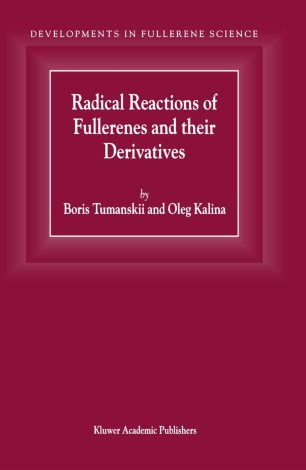 Radical Reactions of Fullerenes and their Derivatives

The discovery of fullerenes, species belonging to the electronodeficient polyalkenes with weakly conjugated double bonds, has opened novel opportunities for the radical chemistry. Pioneering study in this field was performed by P. J. Krusic, E. Wasserman, P. N. Keizer, J. R. Morton, and K. F. Preston (Science, 1991, 254, 1184). The fullerenyl radical adducts formed via addition of atoms or free radicals to fullerenes have no analogs in organic chemistry. In fact, radicals in which the unpaired electrons are delocalized over the surface of a sphere or ellipsoid have never been studied before. The unusual character of the fullerenyl radicals is also due to the fact that they occupy a sort of intermediate position between the planar and tetrahedral radicals. Thus, the elucidation of the characteristic features of fullerenyl radicals and their reactivity by EPR spectroscopy, and the comparison of the results with those of quantum-chemical studies are of fundamental importance. Isolation of the products from homolytic reactions of fullerenes in bulk amounts opens the door to large-scale preparation of new organic and organoelement derivatives of including biologically active ones. Radical reactions of fullerenes find wide application in the synthesis of fullere- containing polymers with valuable photophysical characteristics. Ferromagnetism of the complex of with tetra(dimethylamino)ethylene found lends impetus to a search of novel methods for preparation of biradicals one unpaired electron of those is located on the fullerene cage while the other retained by the addend.