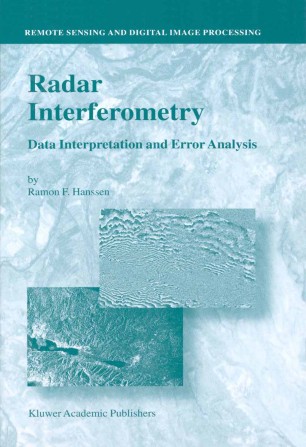 This book is the product of five and a half years of research dedicated to the und- standing of radar interferometry, a relatively new space-geodetic technique for m- suring the earth’s topography and its deformation. The main reason for undertaking this work, early 1995, was the fact that this technique proved to be extremely useful for wide-scale, fine-resolution deformation measurements. Especially the interf- ometric products from the ERS-1 satellite provided beautiful first results—several interferometric images appeared as highlights on the cover of journals such as Nature and Science. Accuracies of a few millimeters in the radar line of sight were claimed in semi-continuous image data acquired globally, irrespective of cloud cover or solar illumination. Unfortunately, because of the relative lack of supportive observations at these resolutions and accuracies, validation of the precision and reliability of the results remained an issue of concern. From a geodetic point of view, several survey techniques are commonly available to measure a specific geophysical phenomenon. To make an optimal choice between these techniques it is important to have a uniform and quantitative approach for describing the errors and how these errors propagate to the estimated parameters. In this context, the research described in this book was initiated. It describes issues involved with different types of errors, induced by the sensor, the data processing, satellite positioning accuracy, atmospheric propagation, and scattering character- tics. Nevertheless, as the first item in the subtitle “Data Interpretation and Error Analysis” suggests, data interpretation is not always straightforward.