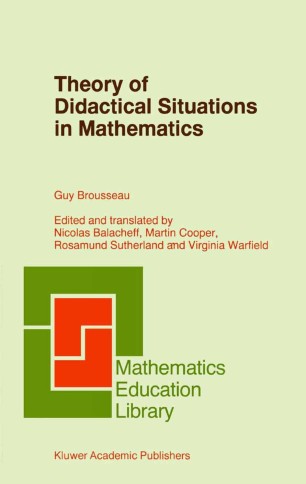 Theory of Didactical Situations in Mathematics

On the occasion of the celebration of “Twenty Years of Didactique of Ma- ematics” in France, Jeremy Kilpatrick commented that though the works of Guy Brousseau are known through texts referring to them or mentioning their existence, the original texts are unknown, or known only with difficulty, in the non-Fren- speaking world. With very few exceptions, what has been available until now have been interpretations of the works of Brousseau rather than the works themselves. It was in response to this need that two of us, in the euphoria of an unforgettable Mexican evening at the time of the 1990 PME conference, decided to undertake the task of translating into English most of the works of Guy Brousseau. The ceuvre is immense, and once past the initial moments ofenthusiasm, with the accompanying ambition to produce the entire of it, we recognized the need to choose both the texts and a method of proceeding. As far as the texts go, we chose to take the period from 1970 to 1990, in the course of which it seemed to us that Brousseau had forged the essentials of the Theory of Didactical Situations. But even there the collection is huge. So, after an initial translation of most of the publications of the period, we carved out a selection, retaining the texts which gave the best presentation of the principles and key concepts of the Theory.