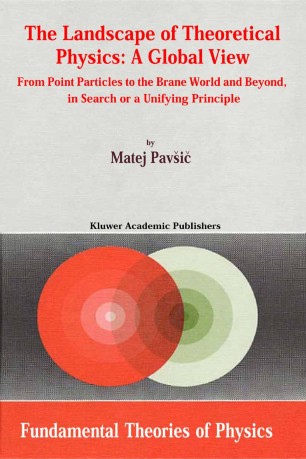 The Landscape of Theoretical Physics: A Global View

From Point Particles to the Brane World and Beyond, in Search of a Unifying Principle

Today many important directions of research are being pursued more or less independently of each other. These are, for instance, strings and mem branes, induced gravity, embedding of spacetime into a higher dimensional space, the brane world scenario, the quantum theory in curved spaces, Fock Schwinger proper time formalism, parametrized relativistic quantum the ory, quantum gravity, wormholes and the problem of “time machines”, spin and supersymmetry, geometric calculus based on Clifford algebra, various interpretations of quantum mechanics including the Everett interpretation, and the recent important approach known as “decoherence”. A big problem, as I see it, is that various people thoroughly investigate their narrow field without being aware of certain very close relations to other fields of research. What we need now is not only to see the trees but also the forest. In the present book I intend to do just that: to carry out a first approximation to a synthesis of the related fundamental theories of physics. I sincerely hope that such a book will be useful to physicists. From a certain viewpoint the book could be considered as a course in the oretical physics in which the foundations of all those relevant fundamental theories and concepts are attempted to be thoroughly reviewed. Unsolved problems and paradoxes are pointed out. I show that most of those ap proaches have a common basis in the theory of unconstrained membranes. The very interesting and important concept of membrane space, the tensor calculus in and functional transformations in are discussed.