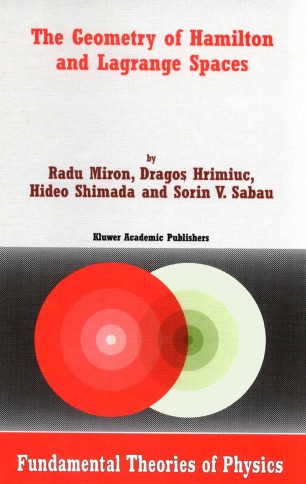 The Geometry of Hamilton and Lagrange Spaces

The title of this book is no surprise for people working in the field of Analytical Mechanics. However, the geometric concepts of Lagrange space and Hamilton space are completely new. The geometry of Lagrange spaces, introduced and studied in [76],[96], was ext- sively examined in the last two decades by geometers and physicists from Canada, Germany, Hungary, Italy, Japan, Romania, Russia and U.S.A. Many international conferences were devoted to debate this subject, proceedings and monographs were published [10], [18], [112], [113],... A large area of applicability of this geometry is suggested by the connections to Biology, Mechanics, and Physics and also by its general setting as a generalization of Finsler and Riemannian geometries. The concept of Hamilton space, introduced in [105], [101] was intensively studied in [63], [66], [97],... and it has been successful, as a geometric theory of the Ham- tonian function the fundamental entity in Mechanics and Physics. The classical Legendre’s duality makes possible a natural connection between Lagrange and - miltonspaces. It reveals new concepts and geometrical objects of Hamilton spaces that are dual to those which are similar in Lagrange spaces. Following this duality Cartan spaces introduced and studied in [98], [99],..., are, roughly speaking, the Legendre duals of certain Finsler spaces [98], [66], [67]. The above arguments make this monograph a continuation of [106], [113], emphasizing the Hamilton geometry.