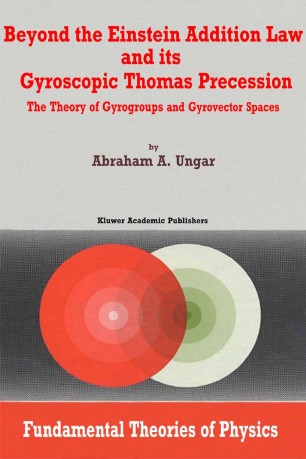 Beyond the Einstein Addition Law and its Gyroscopic Thomas Precession

Evidence that Einstein's addition is regulated by the Thomas precession has come to light, turning the notorious Thomas precession, previously considered the ugly duckling of special relativity theory, into the beautiful swan of gyrogroup and gyrovector space theory, where it has been extended by abstraction into an automorphism generator, called the Thomas gyration. The Thomas gyration, in turn, allows the introduction of vectors into hyperbolic geometry, where they are called gyrovectors, in such a way that Einstein's velocity additions turns out to be a gyrovector addition. Einstein's addition thus becomes a gyrocommutative, gyroassociative gyrogroup operation in the same way that ordinary vector addition is a commutative, associative group operation. Some gyrogroups of gyrovectors admit scalar multiplication, giving rise to gyrovector spaces in the same way that some groups of vectors that admit scalar multiplication give rise to vector spaces. Furthermore, gyrovector spaces form the setting for hyperbolic geometry in the same way that vector spaces form the setting for Euclidean geometry. In particular, the gyrovector space with gyrovector addition given by Einstein's (Möbius') addition forms the setting for the Beltrami (Poincaré) ball model of hyperbolic geometry.
The gyrogroup-theoretic techniques developed in this book for use in relativity physics and in hyperbolic geometry allow one to solve old and new important problems in relativity physics. A case in point is Einstein's 1905 view of the Lorentz length contraction, which was contradicted in 1959 by Penrose, Terrell and others. The application of gyrogroup-theoretic techniques clearly tilt the balance in favor of Einstein.