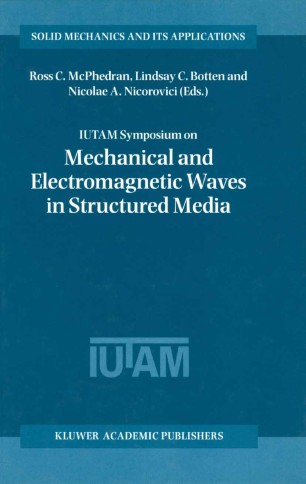 IUTAM Symposium on Mechanical and Electromagnetic Waves in Structured Media

Part of the Solid Mechanics and Its Applications book series (SMIA, volume 91)

The IUTAM Symposium on Mechanical and Electromagnetic Waves in Structured Media took place at the University of Sydney from January 18- 22, 1999. It brought together leading researchers from eleven countries for a week-long meeting, with the aim of providing cross-links between the com- nities studying related problems involving elastic and electromagnetic waves in structured materials. After the meeting, participants were invited to submit articles based on their presentations, which were refereed and assembled to constitute these Proceedings. The topics covered here represent areas at the forefront of research intoelastic and electromagnetic waves. They include effect of nonlinearity, diffusion and multiple scattering on waves, as well as asymptotic and numerical techniques. Composite materials are discussed in depth, with example systems ranging fromdusty plasmas to a magneto-elastic microstructured system. Also included are studies of homogenisation, that field which seeks to determine equivalent homogeneous systems which can give equivalent wave properties to structured materials, and inverse problems, in which waves are used as a probe to infer structural details concerning scattering systems. There are also strong groups of papers on the localization of waves by random systems, and photonic and phononic band gap materials. These are being developed by analogue with semiconductors for electrons, and hold out the promise of enabling designers to control the propagation of waves through materials in novel ways. We would like to thank the other members of the Scientific Committee (A.