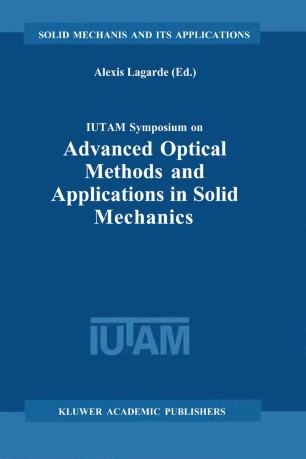 Part of the Solid Mechanics and its Applications book series (SMIA, volume 82)

The request to organize under its patronage at Poitiers in 1998 a Symposium entitled “Advanced Optical Methods and Applications in Solid Mechanics” by the International Union of Theoretical and Applied Mechanics (I.U.T.A.M.) was well received for the following two reasons. First, for nearly 20 years no Symposium devoted to optical methods in solids had been organized. Second, recent advances in digital image processing provided many new applications which are described in the following. We have the honour to present here the proceedings of this Symposium. st th The Symposium took place from august 31 to September 4 at the Institut International de la Prospective in Futuroscope near Poitiers. A significant number of internationally renowned specialists had expressed their wish to participate in this meeting. The Scientific Committee proposed 16 general conferences and selected 33 regular lectures and 17 poster presentations. Papers corresponding to posters are not differentiated in the proceedings from those that were presented orally. It is worth noting that a total of 80 participants, representing 16 countries, registered for this symposium.. The Scientific Committee deserves praise for attracting a significant number of young scientists, both as authors and as participants. Let us add our warm acknowledgements to Professor J.W. Dally and to Professor A.S. Kobayashi who, throughout the symposium preparation time, brought us valuable help.