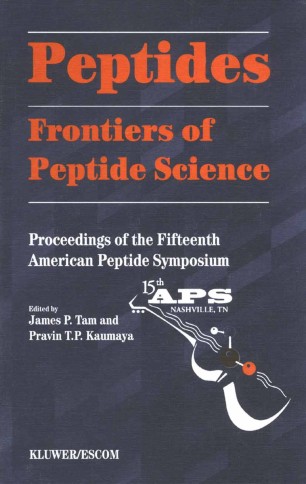 The Fifteen American Peptide Symposium (15APS) was held in Nashville, Tennessee, on June 14-19, 1997. This biennial meeting was jointly sponsored by the American Peptide Society and Vanderbilt University. The attendance of 1,081 participants from 37 countries was lower than the two previously held Symposia. However, the number of participating countries was the largest. Thus, it was gratifying to see that this meeting retained both its international flavor and participant loyalty at a time when there are many more symposia held each year on similar subjects. The scientific program, thanks to the insights and efforts of the Program Committee as well as Dr. Peter Schiller, the President of the American Peptide Society, was extraordinarily rich, diverse, and exciting. It was comprised of 124 oral and 550 poster presentations. Three prominent format changes were installed. First, the Symposium started on Saturday instead of Sunday. Second, the program opened on Saturday afternoon with a Mini-symposium by the Young Investigators to give them an early start and attention. Finally, 40 short and definitive reports were given in two parallel sessions. The expanded format permitted an unprecedented number of lectures and enabled wider participation by the attending delegates.