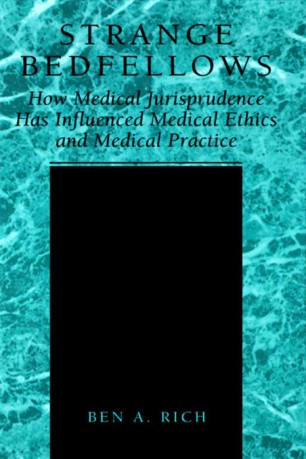 How Medical Jurisprudence Has Influenced Medical Ethics and Medical Practice

The pervasive influence of law on medical practice and clinical bioethics is often noted with a combination of exasperation and lamentation. Physicians and non-physician bioethicists, generally speaking, consider the willingness of courts, legislatures, and regulatory agencies to insinuate themselves into clinical practice and medical research to be a distinctly negative aspect of contemporary American society. They are quick to point out that their colleagues in other Western developed nations are not similarly afflicted, and that the situation which obtains elsewhere is highly preferable to the legalization and purported over-regulation of medicine that has taken place in the United States during the last fifty years. In this book I offer a decidedly different perspective. It is, admittedly, not entirely without personal and professional bias. Prior to becoming a fu- time academic, teaching bioethics in the setting of an academic medical center, I was, for nearly 20 years, an attorney specializing in health law. Even after earning a doctorate in philosophy, I was frequently considered to be the “resident lawyer” on the bioethics faculty, much more frequently looked to for my insights on the law than my perspective as one who had formally studied moral philosophy and applied ethics. I note this not out ofa sense of frustration or disappointment, but as confirmation that even among physicians and n- physician bioethicists, there is widespread recognition that the law does have important contributions to make in assessing the practice ofmedicine and the conduct of medical research.

`The writing style, like most good American academic texts, is clear, unambiguous and easy to follow. It is a great shame for UK medical practitioners that we do not have a similar book for English, Scottish and European law. This is a book that I will recommend to more enthusiastic students.'
Iain Smith, Nuffield Institute for Health, University of Leeds in Journal of Health Organization and Management, 17:6 (2003)
Buy options