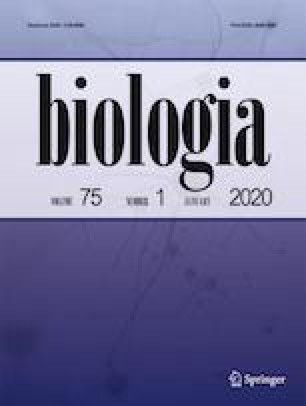 Due to physical and chemical properties as well as biocompatibility, spider silk has a great potential for use in medicine and biotechnology. It is applicable in the regeneration of the skin and nerve grafts. In this work, antibacterial property of spider silk was investigated. This feature would be especially useful for the application of spider threads in medicine. Silk of the spiders Linothele fallax (Mello-Leitão, 1926) and Linothele megatheloides Paz & Raven, 1990 was tested on Escherichia coli, Pseudomonas aeruginosa, Staphylococcus aureus, and Enterococcus faecalis. Prior to inoculation, thesilk was weighed, sterilized with hydrogen peroxide and the effect of the silk on bacteria was tested in Mueller-Hinton broth. A lack of antibacterial properties of the silk of L. fallax and L. megatheloides was observed. The results on antimicrobial properties of silk of mygalomorph spiders are published for the first time.

The ability to produce silk is the most remarkable feature of spiders. Different types of silk produced by spiders are used by them in various ways, which also inspires peoples. In recent years, there has been an increase in the interest of researchers in this biomaterial and attempts to apply it in various areas of human life.

Spiders, depending on their needs, are able to produce several types of silk that differ in biochemical components and physical properties. There are several types of silk glands in Araneomorphae (mostly in orb-weavers): aggregate, cylindriform, flagelliform, aciniform, minor and major ampullate (Foelix 2011), and often a single gland type in Mygalomorphae (Palmer et al. 1982; Palmer 1985).

Due to biocompatibility, strength and elasticity, spider silk has a great potential as a biomaterial. It is applicable in the regeneration of the skin (Wendt et al. 2011) and nerve grafts (Allmeling et al. 2006). Rypstra and Buddle (2012) suggested that silk can contribute to combating plant pests. Carbon nanotubes with silk showed improved electrical conductivity (Steven et al. 2013). In the future, spider webs can be used in the production of ropes, parachutes and biodegradable bottles as was suggested by Singha et al. (2012) and Babu (2013).

Information about antiseptic properties of spider silk has been mostly passed down by word of mouth from one generation to the next. The first written data can be found in the book Wunderbare Welt der Spinnen (Heimer 1988), in which the author suggested that microorganisms are not able to grow on spider silk because of its acidic character. He also stated that in the past humans had applied the tubular webs of Atypus Latreille, 1804 on wounds. Now it is known that spider silk has pH of 4 and contains high concentration of vitamin K which helps in blood coagulation (Wong et al. 2014). Despite historical usage of spider silk, there are few studies concerning its antibacterial properties. Borders (2001) examined the inhibition property of the spider silk on the growth of Gram-negative bacterium Pseudomonas fluorescens but stated that the results were inconclusive. Chakraborty and Das (2009) tested antibacterial property of proteins of pholcid web [(Crossopriza lyoni (Blackwall, 1867)] against Gram-positive and Gram-negative bacteria and showed the antibacterial activity of the spider cob web proteins. Wright and Goodacre (2012) indicated that the silk of Tegenaria domestica (Clerck, 1757) significantly inhibited the growth of Escherichia coli, whereas the effect against Bacillus subtilis appeared to be short lived. In the same year, Mirghani and co-authors published the results of their studies on antibacterial properties of the silk of several spider species, extracted by using solvents such as methanol, ethanol, acetone and water (Mirghani et al. 2012). The acetone extract of silk showed the highest inhibition activity against B. subtilis and E. coli. Similar results were obtained by Roozbahani et al. (2014) and Al-Kalifawi and Kadem (2017) who used acetone as a solvent for silk of Pholcus phalangioides (Fuesslin, 1775) against Listeria monocytogenes and E. coli and silk of Tegenaria domestica against Enterobacter cloacae, E. coli, Klebsiella pneumonia, Streptococcus sp., B. subtilis, Pseudomonas aeruginosa, and Staphylococcus aureus.

Spider silk was also tested for its anti-fungal potential. This property of silk of orb-weaver spider, Neoscona theisi (Walckenaer, 1841), was evaluated by use of pieces of bread (Tahir et al. 2015). Although significant inhibitory effect of the web silk of N. theisi on fungi was noted, the results are not very reliable because the experiment was conducted in uncontrolled conditions. Except the abovementioned papers, other studies on antimicrobial agents of spiders silk were conducted but the complete results have not been published so far as they were either MSc or PhD dissertations (Gellynck 2006; Wright 2011; Sharma 2014).

There are many different components of the spider silk which are evidenced to have antibacterial and antifungal properties. Saravannan (2006) listed 12-methyltetradecanic acid and 14-methylhexadecanoic acid, whereas Chakraborty and Das (2009) and Gomes et al. (2010) indicated potasium hydrogen phosphate and potassium nitrate as substances which can prevent the growth of fungi and bacteria. On the other hand, those phosphate molecules were found in silk threads of egg sack of Araneus diadematus Clerck, 1757, but the antibacterial activity against Bacillus subtilis, Klebsiella pneumoniae subsp. pneumoniae, Pseudomonas aeruginosa and Staphylococcus aureus was not recorded (Gellynck 2006).

The aim of the study was to investigate antibacterial properties of the silk of Linothele fallax (Mello-Leitão, 1926) (Fig. 1a) and Linothele megatheloides Paz & Raven, 1990 (Fig. 1b) (Dipluridae, Mygalomorphae). These species are characterized by very long spinnerets and production of densely woven webs (Fig. 2).

Two specimens of L. fallax and two of L. megatheloides were bred in one-liter plastic containers with coconut chips. Breeding was started in the development stage of the subadult of both species. The substrate was covered with two layers of sterile gauze, which facilitated the removal of uncontaminated spider webs. It was sprayed with water every few days. Spiders were cultured at room temperature (22–24 °C) and fed with house cricket [(Acheta domesticus (Linnaeus, 1758)] every five to seven days. The spider web was collected to sterile containers every 10 to 15 days, compressed into a spherical shape and then weighed before each experiment (Table 1).
Table 1

Antibacterial properties of the webs of L. fallax and L. megatheloides were tested against Gram-negative (Escherichia coli ATCC 8739 and Pseudomonas aeruginosa ATCC 9072) and Gram-positive (Staphylococcus aureus ATCC 6538 and Enterococcus faecalis ATCC 29212) bacteria. Spider silk (5–20 mg), sterilized with vapourized hydrogen peroxide, was added to 5 ml of Mueller-Hinton Broth (Oxoid). The tubes were shaken for 1 h at 230 rpm and then inoculated with approximately 5 × 105 bacterial cells. Incubation was carried out at 35 °C for 18 h. After incubation, the OD600 of cultures was measured by using Cary 3E spectrophotometer (Varian) and compared with positive control (bacterial culture without the silk). Normal distribution of the data was checked with Shapiro-Wilk test. The t-test was used to determine statistical significance of differences in OD600 values between bacterial cultures grown with and without (controls) silk. Statistical analysis was calculated with Statistica 13 (Statsoft).

The OD600 values of bacterial cultures incubated with silk of L. fallax and L. megatheloides and the positive controls are presented in Table 2. No significant decrease (p > 0.05) in the samples with silk added was observed for all bacterial species, regardless of the amount of the silk added and the spider species. The addition of silk to the medium did not inhibit the growth of E. coli, P. aeruginosa, S. aureus, and E. faecalis.
Table 2

The OD600 of bacterial cultures with and without spider silk

Previous studies that showed antiseptic properties of spider silk against Gram-positive, Gram-negative bacteria and fungi were carried out on silk of different species from the suborder Araneomorphae (Borders 2001; Chakraborty and Das 2009; Wright and Goodacre 2012; Roozbahani et al. 2014; Tahir et al. 2015). On the other hand, no data regarding antibacterial properties of silk of Mygalomorphae spiders have been published so far that [only unpublished data available in the PhD thesis of Wright 2011]. In our studies, we tested two of them, Linothele fallax and L. megatheloides. The silk of these species did not inhibit the growth of Gram-negative or Gram-positive bacteria. Similar results were obtained by Wright (2011), who tested the spider web of Lasiodora parahybana Mello-Leitao, 1917. In most cases, Mygalomorphae spiders capture prey through active attack and do not use silk to wrap it for immobilisation, later ingestion or storage (possible antimicrobial effect of silk protecting food against influence of bacteria and fungi) as orb-web weavers of Araneomorphae do (Eberhard 1967; Champion et al. 2001).

Nevertheless, a few studies indicated antiseptic properties of silk of spiders (Mirghani et al. 2012; Roozbahani et al. 2014; Al-Kalifawi and Kadem 2017); however, these results cannot be considered reliable because of the use of solvents such as methanol, ethanol and acetone which inhibit bacterial growth themselves (Tortora et al. 2013).

Antimicrobial properties of spider silk can also be influenced by spider diet and environmental conditions. Contamination of the spider silk by the ground had negative effect on its antibacterial properties (Wright 2011).

All applicable international, national, and/or institutional guidelines for the care and use of animals were followed.