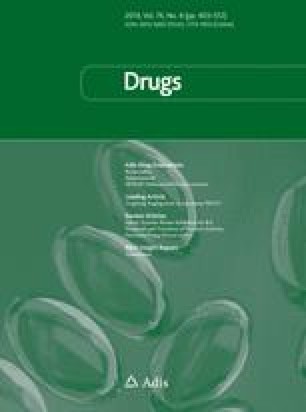 Nesiritide (Natrecor®1) is arecombinant form of human B-type (brain) natriuretic peptide that has beneficial vasodilatory, natriuretic, diuretic and neurohormonal effects. The drug is administered intravenously for the management of patients with decompensated congestive heart failure (CHF).

In the Vasodilation in the Management of Acute Congestive Heart Failure (VMAC) study, patients hospitalised with acute decompensated CHF who received nesiritide had significantly greater mean reductions from baseline in pulmonary capillary wedge pressure 3 hours after starting treatment than nitroglycerin or placebo recipients (−5.8 vs −3.8 and −2mm Hg, respectively); all patients also received standard therapy (e.g. intravenous diuretics). Improvements in other haemodynamic parameters were also seen in nesiritide recipients. In addition, significantly more nesiritide than placebo recipients reported an improvement in dyspnoea after 3 hours' treatment in VMAC, whereas there was no significant difference between nitroglycerin and placebo recipients. Improvements in global clinical status, dyspnoea and fatigue were also seen with nesiritide in another active-comparator study and in a placebo-controlled study.

Nesiritide is generally well tolerated. In VMAC, significantly more adverse events occurred with nitroglycerin than with nesiritide. The most common adverse events reported during the first 24 hours of therapy in nesiritide and nitroglycerin recipients included general pain, abdominal pain, catheter-related pain, headache, nausea, asymptomatic and symptomatic hypotension, nonsustained ventricular tachycardia and angina pectoris. Most episodes of symptomatic hypotension resolved spontaneously or after an intravenous volume challenge of ≤250ml. In addition, nesiritide does not appear to be proarrhythmic.

Conclusion: Short-term intravenous infusion of nesiritide is associated with haemodynamic and symptomatic improvements in patients with acutely decompensated CHF. Nesiritide may offer tolerability and practical advantages over currently used vasodilators, inodilators and inotropes in this condition; in particular, nesiritide does not appear to have proarrhythmic effects. Nesiritide also appears to be effective and well tolerated in patients receiving concomitant β-blocker therapy and in patients with renal insufficiency. Thus, nesiritide is a suitable first-line option for the treatment of patients with acutely decompensated CHF and is a welcome addition in an area where intravenous agents are few.

Nesiritide is structurally and pharmacologically indistinguishable from human B-type (brain) natriuretic peptide (BNP). The vasodilatory, natriuretic and diuretic effects of nesiritide appear to be primarily mediated by its interaction with natriuretic peptide receptor A on target cells and organs (e.g. vascular smooth muscle cells, endothelial cells, kidney and adrenal gland). Nesiritide does not have a direct inotropic effect on the heart.

Human BNP has a natriuretic effect and, in general, a diuretic effect in healthy volunteers; it appears that the major effect of nesiritide on sodium handling occurs in the distal nephron. In patients with CHF, nesiritide increased urine output to a significantly greater extent than placebo in two trials in which diuretics were withheld during the period of evaluation. In two active-comparator trials in which diuretics could be administered as needed, significantly fewer nesiritide recipients than nitroglycerin or standard treatment (e.g. dobutamine) recipients received diuretics.

Nesiritide or human BNP reduced plasma aldosterone levels in patients with CHF in some studies, which may contribute to its natriuretic effect, and also appeared to inhibit plasma renin activity. Nesiritide was associated with significant improvement from baseline in heart rate variability and parasympathetic modulation in patients with decompensated CHF and highly depressed heart rate variability at baseline. Plasma noradrenaline (norepinephrine) and endothelin-1 levels were significantly reduced from baseline in patients with decompensated CHF who received nesiritide.

Nesiritide has multiple routes of elimination. Mechanisms contributing to the clearance of BNP include: binding to the cell surface receptor natriuretic peptide receptor C (after which it is internalised and enzymatically degraded); hydrolysis by neutral endopeptidase 24.11; and renal filtration.

Dosage adjustment is not needed in patients with renal dysfunction who are receiving nesiritide. Moreover, the pharmacokinetics of nesiritide were not significantly altered by the concomitant administration of enalapril. Pharmacokinetic interactions between nesiritide and other intravenous vasodilators, intravenous ACE inhibitors or other cardiovascular drugs have not been formally studied.

Four multicentre randomised trials (n = 127 to 489), including the Vasodilation in the Management of Acute Congestive Heart Failure (VMAC) and Prospective Randomized Evaluation of Cardiac Ectopy with Dobutamine or Nesiritide Therapy (PRECEDENT) studies, have examined the effect of intravenous nesiritide on clinical endpoints in patients hospitalised with acute decompensated CHF.

In VMAC, the largest trial, intravenous administration of nesiritide was associated with a rapid reduction in PCWP that was significantly greater than that in nitroglycerin or placebo recipients as early as 15 minutes after starting treatment and at 3 hours (the primary endpoint); all patients also received standard therapy (e.g. intravenous diuretics). The significant difference between nesiritide and nitroglycerin recipients was maintained after 24, but not after 36 or 48, hours' treatment (although at the later timepoints fewer patients were being invasively monitored meaning that the power to detect between-group differences was lower). Similarly, in a placebo-controlled trial, PCWP at 6 hours was reduced by a significantly greater extent with nesiritide 0.015 or 0.03 µg/kg/min than with placebo. Other haemodynamic parameters (e.g. RAP, pulmonary vascular resistance, SVR and CI) also improved in nesiritide recipients in both studies.

Symptomatic improvements were apparent in patients with acute decompensated heart failure who received nesiritide. In the placebo-controlled trial, improvements in global clinical status, dyspnoea and fatigue were reported in significantly more nesiritide than placebo recipients. In VMAC, significantly more nesiritide than placebo recipients reported an improvement in dyspnoea after 3 hours' treatment; the differences between nesiritide and nitroglycerin recipients or between nitroglycerin and placebo recipients were not statistically significant. The majority of patients also experienced an improvement in global clinical status, although the between-group differences were not statistically significant. In another active-comparator study, similar proportions of patients receiving nesiritide or standard therapy (i.e. dobutamine, milrinone, nitroglycerin, dopamine or amrinone) experienced improvements in global clinical status, dyspnoea and fatigue as assessed after 6 and 24 hours' therapy and at study end (up to 7 days' therapy).

There was no significant difference between nesiritide and nitroglycerin recipients in 6-month mortality in VMAC (25.1% [95% confidence interval (CI) 20.0–30.5%] and 20.8% [95% CI 15.5–26.5%]). In the other active-comparator trial, 6-month mortality was significantly lower in recipients of nesiritide 0.015 µg/kg/min than in dobutamine recipients (18 vs 31 %); this result should be interpreted with caution because of study design issues and because mortality was not a prespecified endpoint.

Preliminary data from a small (n = 20) case-control study conducted in the US indicate that nesiritide was associated with reductions in healthcare resource utilisation and costs in patients with acute decompensated CHF.

Infusion of nesiritide is generally well tolerated. In VMAC, significantly fewer nesiritide than nitroglycerin recipients experienced adverse events during the placebo-controlled period (18 vs 27%) and during the first 24 hours of treatment (51 vs 68%). The most common noncardiovascular adverse events occurring during the first 24 hours of treatment in nesiritide and nitroglycerin recipients included general pain (4 vs 5%), abdominal pain (1 vs 5%), catheter-related pain (1 vs 5%), headache (8 vs 20%) and nausea (4 vs 6%). Differences between groups were statistically significant for abdominal- and catheter-related pain and headache. No individual adverse event occurred with significantly greater frequency in nesiritide than nitroglycerin recipients.

Analysis of the PRECEDENT study indicates that nesiritide (0.015 or 0.3 µg/kg/min) is not proarrhythmic in patients hospitalised with symptomatic CHF, in contrast to dobutamine.

Increases in serum creatinine levels to >0.5 mg/dl (>44 µmol/L) above levels at study entry occurred in 17 to 28% of nesiritide recipients in the PRECEDENT and VMAC trials (assessed to days 14 and 30, respectively). This laboratory change was seen in 11 and 21% of standard therapy and nitroglycerin recipients in the corresponding trials. In VMAC, 3% of nesiritide recipients and 2% of nitroglycerin recipients required first-time dialysis during 30 days of follow-up (p value not significant).

Intravenous nesiritide is approved in the US for use in the treatment of patients with an acute decompensation of CHF who have dyspnoea with minimal exertion or at rest. The recommended dosage is an intravenous bolus of 2 µg/kg followed by a continuous infusion of 0.01 µg/kg/min. Close monitoring of blood pressure (BP) is mandatory during nesiritide administration. In patients who develop hypotension during treatment, the infusion rate should be reduced or the drug should be discontinued; other measures to support BP should also be initiated if required.

Nesiritide has a US FDA category C pregnancy rating and should only be used during pregnancy if the potential benefit to the mother outweighs the potential risk to the fetus. In addition, the drug should be administered with caution to breastfeeding women. The efficacy and tolerability of nesiritide in paediatric patients has not been established.

Dobutamine Pulmonary Capillary Wedge Pressure Decompensated Heart Failure Nesiritide Right Atrial Pressure
These keywords were added by machine and not by the authors. This process is experimental and the keywords may be updated as the learning algorithm improves.

Sources: Medical literature published in any language since 1980 on nesiritide, identified using Medline and EMBASE, supplemented by AdisBase (a proprietary database of Adis International). Additional references were identified from the reference lists of published articles. Bibliographical information, including contributory unpublished data, was also requested from the company developing the drug.

Selection: Studies in patients with congestive heart failure who received nesiritide. Inclusion of studies was based mainly on the methods section of the trials. When available, large, well controlled trials with appropriate statistical methodology were preferred. Relevant pharmacodynamic and pharmacokinetic data are also included.