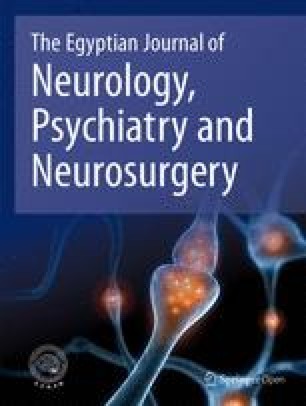 High levels of inflammatory markers such as C-reactive protein (CRP) and interleukin (IL)-6 are associated with worse outcome after ischemic stroke.

To study whether the level of IL-6 following ischemic stroke is related to the severity of stroke, infarct volume, stroke subtype, and its impact on stroke outcome.

A total of 90 patients of acute ischemic stroke were enrolled with calculation of infarct volume in MRI brain, and serum IL-6 samples were obtained within 24 h and also after 3 months from stroke onset. NIHSS and MRS were done at stroke onset and after 3 months.

The mean value of IL-6 was higher among patients with small vessel occlusion (8.47 pg/ml) with a significant positive correlation between IL-6 and National Institute of Health Stroke Scale (NIHSS) and modified Rankin Scale (MRS) after 3 months. IL-6 was significantly higher in patients with recurrence with a cutoff IL-6 value above which recurrence is anticipated which is 7.75 pg/ml.

Area under the curve

Inflammatory response plays an essential role in the pathophysiology of acute ischemic stroke (AIS) [1]. Plasma level of various inflammatory markers is noted to be higher in stroke patients compared to healthy populations [2]. On the basis of the pathophysiologic differences between different stroke subtypes, it is possible to hypothesize a different pattern of immuno-inflammatory activation in relation to those subtypes. A nonspecific systemic inflammatory response occurs after either ischemic or hemorrhagic stroke as a part of the process of brain damage. Elevated levels of inflammatory markers such as C-reactive protein (CRP) and interleukin-6 are associated with poor outcome after ischemic stroke. Interleukin-6 can cause the release of prostaglandin E2 in the brain, and prostaglandin E2 activates the hypothalamus leading to an increase in body temperature. Different studies reported that fever is correlated with increased size of infarction and poor stroke outcome; thus, the early and prolonged elevation in interleukin-6 in the CSF and blood most likely correlates with increased risk of fever that increases tissue damage after ischemic stroke [3]. Significant increase of interleukin-6 levels have been reported in stroke patients shortly after the ischemic event. All major brain tissue cell types are capable of synthesizing interleukin-6 [4].

Aim of this work

This research aims to study whether the level of IL-6 following ischemic stroke is related to the severity of stroke, infarct volume, stroke subtype, and its impact on stroke outcome.

The study subjects which included 90 patients of acute ischemic stroke within 24 h from stroke onset were recruited to this prospective cohort study from the stroke unit at Ain Shams University hospitals during the period from December 2014 to October 2015. All patients had detailed neurologic history, examination, and investigations to determine different stroke mechanisms and their risk factors. Neurological status of our subjects was assessed via the National Institute of Health Stroke Scale (NIHSS) and modified Rankin Scale (mRS) after which was done on admission and after 3 months for follow-up. We consider NIHSS more than 21 as poor prognosis and less than 5 as good prognosis. All patients had magnetic resonance imaging (MRI) of the brain (diffusion-weighted, flair, T1, T2, and T2* images) and magnetic resonance angiography (MRA) (Philips 1.5 Tesla, Germany). The infarct volume can be calculated (approximately) using the formula ABC/2, where A, B, and C are the longest 3 orthogonal distances of the lesion as measured [5]. According to infarction volume, small vessel disease was considered less than that of 508 mm3, while large vessel disease those exceeding 508 mm3 [6]. Serum IL-6 samples were collected in the first 24 h from stroke onset. Serum was collected and stored at − 70 °C after centrifugation of the blood samples at 3000×g for 10 min. For the quantitative detection of IL-6, the human IL-6 enzyme-linked immunosorbent assay (ELISA) kit which was provided by Assaypro LLC (number EI1006-1) was used and the instructions were done according to the provided catalog in the laboratory of Ain Shams University hospitals. Circulating IL-6 can be found in the blood of normal individuals in the 1 pg/ml range [7, 8]. Carotid duplex (General Electric Logic 5, USA), transthoracic echocardiography, and transesophageal echocardiography (if needed) (General Electric S5, USA) were done for all the studied patients.

A clinical presentation of the first ever acute ischemic cerebrovascular stroke, within 24 h from stroke onset (defined according to WHO definition as the presence of rapidly developing focal neurological signs or symptoms of vascular origin that persists for more than 1 h with evidence of acute infarction on diffusion-weighted imaging in MRI) [9].

Patients were excluded from enrollment if age is less than 18 years, other determined etiology and undetermined etiology of stroke subtypes according to the Trial of ORG 10712 in Acute Stroke Treatment (TOAST) classification [10], presence of cancer, receiving thrombolytic therapy, and systemic disorders (inflammatory or infectious diseases, hematological diseases, rheumatologic diseases, severe renal or liver failure, patients who were under treatment with anti-inflammatory drugs, and immunosuppressive or immunomodulatory drugs for any medical disease in the last 6 months). Patients with fever of unknown etiology or with recent venous thromboembolism. Laboratory investigations were done for all patients to exclude those causes (complete blood picture, ESR, CRP, uric acid, renal function test, liver function test, collagen profile, urine analysis)

The study was approved by Ain Shams University Ethical Committee in December 2014. Written informed consent was obtained from the patients participating in the study, or their first-degree relatives after informing them about the study rationale and their right to withdraw from the study at any time without any consequences.

Compliance, recurrence, and mortality among cases

Patients were followed up after 3 months to assess their prognosis, compliance on their medications, recurrence of stroke, and mortality (Table 1). Eighty-eight patients (97.7%) were compliant on their medications, and 15 patients (16.6%) showed recurrence of the stroke (Table 2). Mortality occurred in 10 patients representing 11.1% of patients (5 patients due to recurrence, 3 patients due to myocardial infarction, 1 patient due to chest infection, and 1 patient due to dehydration). The mean time to death among those 10 patients was 1.6 months (SD 1.84) (Table 2).
Table 1

Description of compliance, recurrence and mortality among cases

Correlation between interleukin-6 and stroke volume

Interleukin-6 and prediction of recurrence

The cutoff interleukin-6 value above which recurrence is anticipated is 7.75 pg/ml (at which the test sensitivity is 0.93 and the test specificity is 0.75).

Our study was set out to assess the role of interleukin-6, as a marker for inflammation in AIS. We studied the level of IL-6 in 90 patients in relation to stroke severity, subtype, and volume and its impact on stroke outcome.

In our study, we assessed the functional status of the studied cases on admission and clinical outcome after 3 months as well as recurrence in correlation with interleukin-6 level. We consider NIHSS more than 21 as poor prognosis and less than 5 as good prognosis. There was non-significant positive correlation between IL-6, mRS, and NIHSS on admission, while there was statistically significant positive correlation between interleukin-6, mortality, NIHSS, and mRS after 3 months, denoting worse outcome and higher mortality after 3 months with higher levels of interleukin-6. This means that IL-6 may have been associated with long-term rather than short-term outcome. The risk of recurrent stroke is high in the first few weeks after stroke, and clinical risk prediction tools have only limited accuracy [17], hence the importance of identifying a biomarker that can assess recurrence.

A few limitations of our study have to be addressed. First, we did not perform serial measurements of IL-6 in order to select its peak levels. As we assumed that for the clinician in the emergency department, the feasible test will not include serial measurements. A second limitation is that although antiplatelets and statins could have an effect on the number of recurrent strokes, but given the high rate of compliance in our study, we were not able to determine the predictive value of interleukin-6 in patients not on medication. Third, we could not use a multifactorial model to assess whether plasma interleukin-6 level was related to outcome independent of risk factors, stroke severity, or infarct size due to the limitation of our sample size.

Our study concluded that inflammation has an important role in the pathogenesis of acute ischemic stroke particularly small vessel occlusion and it provided evidence that interleukin-6 contributes to the determination of clinical outcome of AIS and prediction of recurrence, suggesting a role for interleukin-6 as a prognostic marker.

Interleukin-6 could be applied in the routine clinical settings as an additive prognostic tool (together with clinical features, radiological investigations, and risk factors) in patients with AIS. This important marker should be used as a predictor of stroke recurrence, for the early identification and monitoring of patients at high risk of recurrence.

The study was approved by Ain Shams University Ethical Committee in December 2014. Written informed consent was obtained from the patients participating in the study, or their first-degree relatives if the patient was unable to provide consent due to weakness or disturbed conscious level, after informing them about the study rationale and their right to withdraw from the study at any time without any consequences.