Journal of Analytical Science and Technology 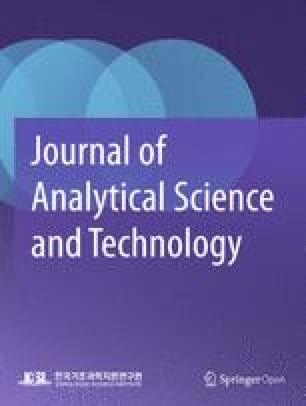 Journal of Analytical Science and Technology

This paper presents the application of polyglycine-modified graphene paste electrode (PGMGPE) for the electrochemical detection of Hg (II) and Pb (II) ions in the water and biological samples.

The developed electrode was characterized by field emission scanning electron microscopy. Electrochemical techniques such as cyclic voltammetry and differential pulse voltammetry were used to study the behavior of metal ions.

The modification process improves the electrochemical behavior of heavy metal ions. The peak current varied linearly with the increase of the concentration leading to a detection limit of 6.6 μM (Hg (II)) and 0.8 μM (Pb (II)), respectively.

The developed electrode exhibits good sensitivity, selectivity, stability, and lower detection limit, and was successfully applied to the determination of heavy metal ions in water and biological samples with a good recovery range.

In this paper we report the development of an electrochemical sensor based on polyglycine-modified graphene for the determination of Hg2+ and Pb2+ ions using the cyclic voltammetry (CV) technique. The electrochemical behavior of the heavy metal ions was studied at the bare and modified electrode and it was shown that the redox signal of these two heavy metal ions was promoted by the modified electrode. The developed sensor is less expensive and shows a wide linear response range with low detection limit, good stability, and reproducibility. Short or limited shelf life is the main disadvantage of the developed sensor. To our best knowledge, no research has been conducted to study the heavy metal ion detection at polyglycine-modified graphene paste electrode.

CV and DPV were performed using the CHI6038E (CH Instrument, USA). The electrochemical cell comprises three electrodes; platinum wire and calomel electrode were used as a counter electrode and a reference electrode, respectively. The working electrode used in this study was a 3 mm-diameter unmodified and modified graphene paste electrode. All the experiments were performed at room temperature. pH measurements were carried out using EQ-610 pH meter, which was calibrated before use. Field emission scanning electron microscopy (FESEM) was obtained using the instrument operating at 5.00 kV (DST-PURSE Laboratory, Mangalore University). All the peak currents were taken with background current.

Bare graphene paste electrode was prepared by thoroughly mixing (15 min) 60:40 w/w% of graphene and silicone oil in a small agate mortar. A portion of the paste was then packed into the tip of the electrode of 3 mm diameter. Before each experiment, the surface was smoothed with a tissue paper until a shiny and clean electrode surface was obtained.

where Ip is the peak current in A, C0 is the concentration of the electroactive species (mol/cm3), n is the number of electrons involved in the reaction, D0 is the diffusion coefficient in cm2/s, v is the scan rate (V/s), and A is the electroactive surface area (cm2). For the modified electrode, the surface area is maximum (0.03 cm2) as compared to the bare electrode (0.02 cm2).

CV was investigated to check the electrode behavior before and after the modification. A small anodic and cathodic peak was observed on the BGPE (Fig. 4 (curve b)) in 0.1 M PBS at pH 4.5 in the potential window from -0.10 V to 0.50 V for HgCl2. It showed that the electron transfer between the electrode and analyte (HgCl2) in the solution occurred very slowly. Two reduction peaks were observed for HgCl2 at 0.119 V and 0.0407 V, which were shifted to 0.133 V and 0.015 V at PGMGPE (Fig. 4 (curve a)) with an increase in both peak currents. This result shows that the electron transfer rate increased at PGMGPE. The mechanism for the reduction process is explained as follows:
$$ {\mathrm{Hg}}^{2+}+\mathrm{e}\to {\mathrm{Hg}}^{+} $$
$$ {\mathrm{Hg}}^{+}+\mathrm{e}\to {\mathrm{Hg}}^0 $$
Figure 5 shows the CV response of PbCl2 at the BGPE (curve b) and PGMGPE (curve a). A small current response observed at the bare electrode showed the difficulty of the metal ions to be adsorbed on to the bare electrode. On the other hand, for the modified electrode, the peak current value was larger than that obtained for the bare electrode, showing that the glycine film could be as an excellent supporting material for the heavy metal sensor. The polyglycine film exhibited a strong adsorption power of the heavy metal ions, and hence improved the surface sensitivity of the electrode.

The pH for the determination of heavy metal ion has a significant effect on the voltammetric behavior. The effect of different pH values on the electrochemical response was studied in the pH range from 3.5 to 5.5. Figure 6a shows the cyclic voltammograms for HgCl2 at different pH values at a scan rate of 0.1 V/s in the potential window from -0.10 to 0.50 V. It was observed that the peak current for HgCl2 is maximum at pH 4.5. The decrease in the current at pH lower than 4.5 is explained by the protonation process, which affects the hydrophilic character of the electrode. The decrease in the current at pH higher than 4.5 is attributed to the hydrolysis of Hg2+ ions. Therefore, all electrochemical measurements were carried out in 0.1 M PBS at an optimal pH 4.5. The linear shift in the oxidation potential is describes by the equation: Epa (V) = 313.4-18 pH, with the correlation coefficient of 0.99 (Fig. 6b). The relation between the peak current and pH is shown in Fig. 6c.

To study the nature of the electron process, the effect of various scan rates was evaluated in 0.1 M PBS of pH 4.5 from 0.1 to 0.275 V/s. Figure 7a shows the effect of scan rate on the peak current for HgCl2. It was observed that as the scan rate increased, the peak current also increased, and the potential was shifted to the more positive side. It was observed that the peak potential was shifted from 0.235 V to 0.270 V. The linear relationship between the peak current and scan rate is described by the following equation: Ipa (μA) = -11.34 + 682.57 v (V/s), with the correlation coefficient of 0.99 (Fig. 7b). It indicates that the electrode process is adsorption controlled.

Figure 7c shows the cyclic voltammograms for PbCl2 for different scan rates. It was seen that as the scan rate increased, the peak current also increased and peak potential was shifted toward less negative from 0.1 to 0.250 V/s in 0.1 M PBS having pH 4.5. There is a linear relationship between the peak current and scan rate as observed in the linear regression equation of Ipa (μA) =60.17 + 1334.4 v (V/s), with the correlation coefficient of 0.994 (Fig. 7d), indicating that the electrode process is adsorption controlled.

Application of the modified electrode to the real sample

The analytical performance of the prepared electrode in practical application was evaluated by measuring the activity of heavy metal ions in the real water sample. The sensor was tested and validated using the water sample in the potential -0.1 to 0.50 V with a scan rate of 0.1 V/s. In the groundwater sample, no signal was observed for the metal ions (Hg2+ and Pb2+); however when different concentrations of HgCl2 and PbCl2 were added to the sample, current peaks were observed. Table 2. shows the recovery ranges of Hg (II) and Pb (II). The obtained result shows that the developed electrode can have a suitable potential applicability in environmental monitoring.
Table 2

Blood sample (2 ml) was collected from the nearest district hospital. The serum was prepared by centrifuging the blood sample at 5000 rpm for 5 min. 1 ml of the sample was dissolved in 25 ml of PBS and made up to the mark, and the experiment was carried out with the standard addition method. Table 3 shows the recovery ranges of metal ions in the blood sample.
Table 3

Determination of metal ions in the blood sample

To investigate the stability of the sensor, the current behavior was studied before and after 25 cycles in 0.1 M PBS, at 4.5 pH and scan rate of 0.1 V/s. It was observed that even after 25 cycles, 85% of the initial current was retained, showing that the developed sensor had good stability. Reproducibility was studied with three successive removals of the electrode, keeping the solution same. It was observed that the relative standard deviation of 2.85% for the analyte indicated that the electrode had acceptable reproducibility.

In this work, a novel electroanalytical method which showed good sensitivity and comparable with previous reports was presented. The method is based on the subduing of the peak current of the modifier due to the analyte in a modified carbon paste electrode.

In this study, an electrochemical sensor based on polyglycine-modified graphene paste electrode (PGMGPE) was developed for the quantification of trace Pb (II) and Hg (II). The developed electrode exhibits good sensitivity, selectivity, good stability, and lower detection limit. It was shown that the developed electrode provides an alternative strategy for the electrochemical determination of heavy metal ions. The modified electrode has been used to determine the Pb (II) and Hg (II) in water and blood samples. The result obtained in the analysis of Hg (II) and Pb (II) in water and blood samples had a good recovery, demonstrating the applicability of the method for real sample analysis.

This research work was planned and executed by CR and JGM. The experimental work and analysis were carried out by CR and JGM, and the manuscript was written by CR. All authors read and approved the final manuscript.

This research did not receive any specific grant from funding agencies.