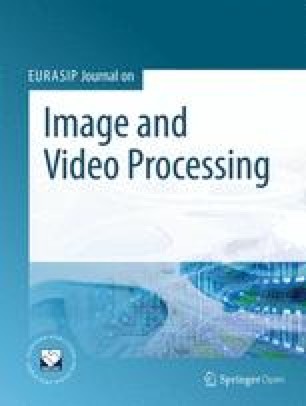 The Vese-Chan model for multiphase image segmentation uses m binary label functions to construct 2m characteristic functions for different phases/regions systematically; the terms in this model have moderate degrees comparing with other schemes of multiphase segmentation. However, if the number of desired regions is less than 2m, there exist some empty phases which need costly parameter estimation for segmentation purpose. In this paper, we propose an automatic construction method for characteristic functions via transformation between a natural number and its binary expression, and thus, the characteristic functions of empty phases can be written and recognized naturally. In order to avoid the redundant parameter estimations of these regions, we add area constraints in the original model to replace the corresponding region terms to preserve its systematic form and achieve high efficiency. Additionally, we design the alternating direction method of multipliers (ADMM) for the proposed modified model to decompose it into some simple sub-problems of optimization, which can be solved using Gauss-Seidel iterative method or generalized soft thresholding formulas. Some numerical examples for gray images and color images are presented finally to demonstrate that the proposed model has the same or better segmentation effects as the original one, and it reduces the estimation of redundant parameters and improves the segmentation efficiency.

The Mumford-Shah model [3] is fundamental to variational image segmentation; it is a region-based model which approximates an image to a piecewise smooth one and edges. To circumvent the difficulty of its implementation, Chan and Vese [4] proposed the classical Vese-Chan model under variational level set framework [5] based on reduced Mumford-Shah model with piecewise constant image assumption. The Chan-Vese model introduced one-level set function to construct two characteristic functions for two regions. Using the same concept, [6] introduced n-level set functions to partition n regions for Potts model [7], but a simplex constraint must be added to avoid vacuum and overlapping problem. In order to improve computational efficiency from the viewpoint of model, Pan et al. [8] proposed to use (n−1)-level set functions to design n characteristic functions satisfying the simplex constraint naturally. Vese and Chan [9] proposed a strategy using m-level set functions to design n=2m characteristic functions for different regions with less evolution equations to be solved. Furthermore, Chung and Vese [10] proposed a more efficient scheme using only one smooth function to partition different regions.

Our research in this paper starts from Vese-Chan model via binary label functions [11], and the goal is to improve the computational efficiency through modifying its original model with fewer parameters to be estimated. Using Vese-Chan model, the number n of regions is determined by binary label function number m (i.e., n=2m). For instance, if we partition 9 regions, we need 4 binary functions to construct 16 characteristic functions, and thus 7 regions are empty; however, the parameters in these empty regions must be estimated when using the original model. To avoid the parameter calculations in these redundant regions, [17] proposed a modified scheme for characteristic functions after 2m−1 regions that include two parts to discard the last empty regions, which can overcome the problem of redundant parameter estimations.

In this paper, we use a unified characteristic function expression for all regions including redundant regions, but we add some simple area constraints of redundant regions to avoid estimations of redundant parameters, thus reducing costs. Although we transform the original model into a constrained optimization problem, we use ADMM [18, 19, 20] to solve it easily and systematically without additional constructions of characteristic functions for empty regions.

The outline of the paper is as follows. In Section 2, we present some classical models of variational image segmentation, covering the Potts model and Vese-Chan model for multiphase image segmentation using binary label functions. In Section 3, we propose the modified Vese-Chan model and design its ADMM. In Section 4, experimental results of gray images and color images are given to illustrate the efficiency of the proposed model in this paper. Concluding remarks are drawn finally.

where |∂Ωi| stands for the boundary length of each sub-region.

which will reduce the generality of characteristic function for different region numbers and increase the computation time. In the next section, we propose another modified Vese-Chan model to overcome these problems.

3.1 Characteristic functions based on binary decomposition

3.2 The classic optimization scheme of the Vese-Chan model

In Eq. (24), x and y represent coordinates in the image, h is spatial step, and ε is a small positive value.

For the optimization of variable ϕ, the curvature term of ϕ will be obtained if the alternative optimization method is used directly, causing complex difference scheme and low computational efficiency. However, the ADMM method can avoid computing the curvature term and simplify the solving process by introducing auxiliary variables and Lagrange multipliers.

3.3 The modified model for gray images and its ADMM

where k is the iteration step.

The ADMM of modified model for gray images can be described as Algorithm 1. 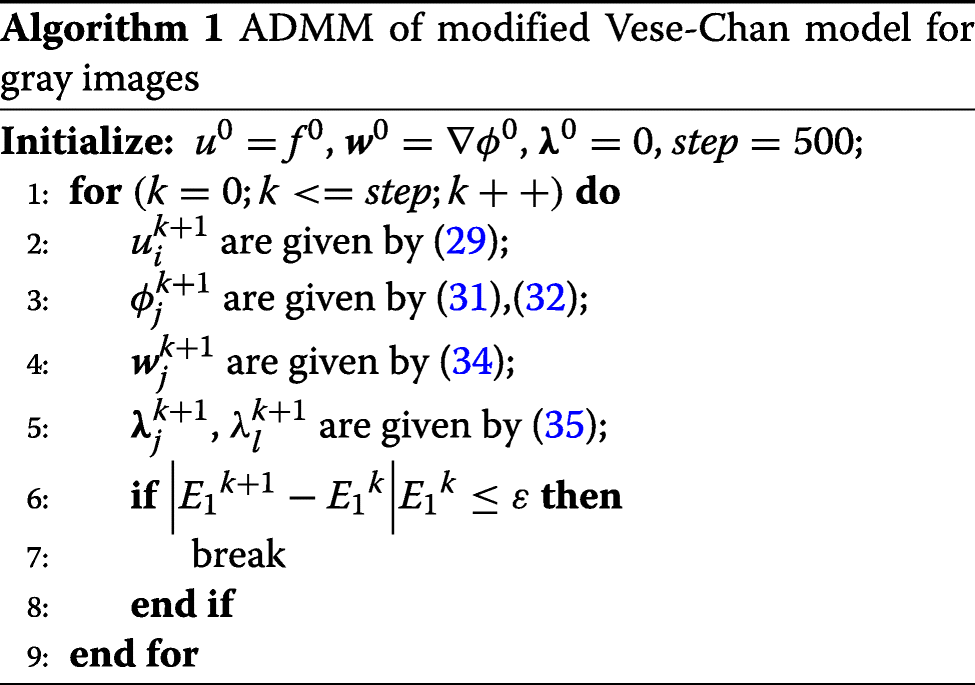 3.4 The modified model for color images and its ADMM

it is also subjected to the constraints (25).

The ADMM of the modified model for color images can be described as Algorithm 2. 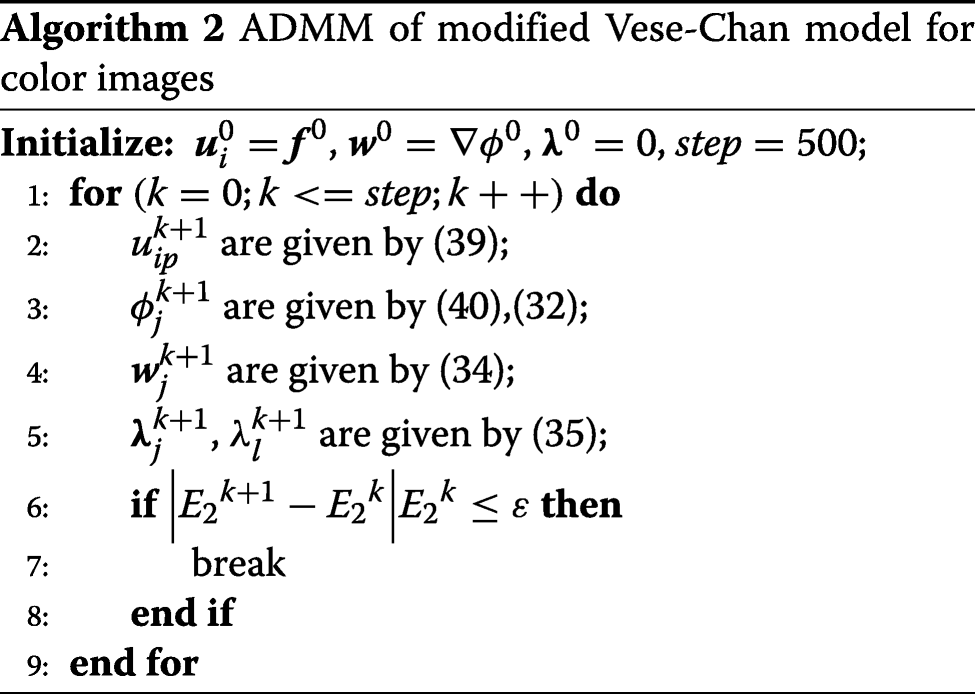 In this section, we present two groups of numerical experiments for segmented images including gray images and color images to study the effectiveness and efficiency of our method. For Eqs. (27) and (38), if the number of regions N=2m, this method represents traditional 2m-phase segmentation with ADMM. If N<2m, it represents the proposed method in this paper. The initial binary label function ϕ is initialized as m circles, there are two cases, in the circle ϕ0=1 otherwise ϕ0=0. In our experiments, We set α=1,μ=1, h=1,ε=10−6, ε=10−5. All experiments are performed using MATLAB R2016a on a Window 7 platform with an Intel(R) Core(TM) i5-4590 CPU at 3.30GHz and 4.00GB memory.

4.1.1 Comparisons between the classic optimization method and ADMM

Iterations and computational time for Figs. 2a and 3a

4.1.2 Comparisons between Algorithm 1 and other methods

Iterations and computational time for Figs. 4a, 5a, 6a, and 7a

Iterations and computational time for Fig. 8a

From Table 4, our method without ADMM consumes less iterations and computational time than TV regularization without acceleration method, because we add area constraints of redundant regions and simplify the expression of characteristic functions. Besides, our method consumes less computational time than TV regularization method, and the reason of which is we use ADMM method to compute energy optimization, improving the computational efficiency.

The number of regions N can be detected according to the number of target objects in the image. In the paper, the segmented images are simple and easy to determine the value of N. However, if the image is complex, the value of N is difficult to determine, which is a limit that needs to be solved in the future.

In order to improve the computation efficiency of the Vese-Chan model for multiphase image segmentation in a systematic form, we have designed a modified Vese-Chan model by introducing some simple area constraints. The forms of characteristic functions are unified, and the redundant parameter estimations are not needed, therefore, the cost of computation is reduced. Obviously, the computational efficiency is higher with the increase of the empty regions. Additionally, we formulate the ADMM for the proposed model to further improve efficiency. Some numerical examples for gray image and color image multiphase segmentation are presented to demonstrate that the proposed model has the same or better segmentation effects and higher efficiency. Our method can be applied into motion segmentation, surface segmentation, and 3D reconstruction in the future work.

The authors thank the editor and anonymous reviewers for their helpful comments and valuable suggestions.

Jie Wang was born in 1994. She is a postgraduate student of College of Computer Science and Technology, Qingdao University, Qingdao, China. Her current research interests include variational image restoration and segmentation. Email: wangjqdy@163.com.

Zhenkuan Pan was born in 1966. He received his Ph.D. degree in Engineering Mechanics from Shanghai Jiao Tong University, Shanghai, China in 1992. He is a Professor in College of Computer Science and Technology, Qingdao University, Qingdao, China. His current research interests include dynamics and optimization of multibody systems, medical simulation and variational image processing.

Weibo Wei was born in 1981. He received his Ph.D. degree from Nanjing University of Science and Technology, Nanjing, China in 2006. He is an Associate Professor in College of Computer Science and Technology, Qingdao University, Qingdao, China. His current research interests include image processing, biometric identification, automatic target recognition and tracking. Email: njustwwb@163.com.

Guodong Wang was born in 1980. He received his Ph.D. degree in Pattern Recognition and Intelligent System in Huazhong University of Science and Technology, Wuhan, China in 2008. Now he is an Associate Professor in College of Computer Science and Technology, Qingdao University, Qingdao, China. His research interests include variational image science, face recognition, intelligent video surveillance, 3D reconstruction and medical image processing and analysis. Email: doctorwgd@gmail.com.

This work was supported by the National Natural Science Foundation of China (Grant No.61772294).