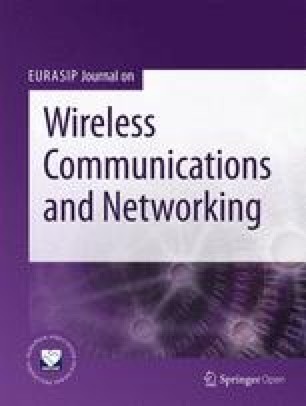 In this paper, a novel adaptive algorithm to detect and track targets with low grazing angle is addressed. For this purpose, an orthogonal frequency division multiplexing (OFDM) radar signal is employed through an edge computing framework over the radar platform. However, detecting the targets in the low grazing angle area is a great challenge due to severe multipath reflection effects. The Earth’s curvature geometry model is presented as the multipath propagation model. Based on the fact that the different scattering centers of a target resonate at different frequencies, we use the optimized OFDM waveform and propose a novel target tracking procedure for low grazing angle target tracking scenarios. The obtained results show that using an OFDM radar waveform provides a more uniform detection coverage in the presence of multipath propagation such that this will fill in the nulls. Finally, simulations are used to compare the performance of the proposed OFDM waveform with the conventional equal-power, the generalized likelihood ratio (GLR)-based and single-carrier waveforms.

Angle of arrival (AOA) estimation in a low grazing angle is one of the most challenging problems in radar fields [1, 2, 3], where the multipath effect is the main problem. In this case, the detection and tracking performance severely deteriorated due to the random phase variation of indirect signals. The direct and reflected returns coherently combined at the receiver with the peaks (maxima) and nulls (minima) corresponding to complete constructive and destructive interference, respectively, depending upon the phase difference. It had been shown that multipath reflections affects categorized into two different aspects, namely, multipath suppression and multipath utilization. Some methods regard the multipath effect as a clutter component and try to suppress it [4, 5, 6, 7, 8, 9, 10, 11, 12]. Numerous methods, such as spatial smoothing techniques, proposed removing the coherency [13, 14]. It had been demonstrated in [15] that the detection performance could be enhanced via multipath utilization with a statistical multiple-input multiple-output (MIMO) radar. The authors have further investigated a hybrid MIMO radar for detecting low grazing angle targets in multipath propagation scenarios [16].

We know that the location of the multipath nulls is frequency-dependent in range and elevation angle. Some methods have shown that using the advantage of multipath propagation, which provides spatial diversity of radar systems and frequency diversity of orthogonal frequency division multiplexing (OFDM) waveforms, and a remarkable improvement will be achieved [17]. The authors presented an adaptive waveform design method based on maximizing the Mahalanobis distance to improve the target detection performance in low grazing angle situations. We consider the OFDM signaling scheme [18, 19, 20, 21, 22, 23, 24, 25], which is one of the ways to accomplish the simultaneous use of several subcarriers. Furthermore, the monopulse method, which has been utilized in many studies for target detection and tracking [26, 27, 28, 29, 30, 31], has been applied for the angle of arrival estimation. A new adaptive beamforming method has been investigated in [32] for low-angle target tracking under multipath scenarios. They proposed a new monopulse technique that utilizes an iterative interference cancellation algorithm to overcome performance degradation.

In this study, we have investigated a new recursive algorithm which provides an efficient spectrum that uses optimized OFDM waveform proposed in [33]. The angle of arrival for each distance of a target is estimated based on the signal error obtained by the amplitude monopulse method. Simulation results show that the proposed approach allows to intelligently selecting subcarriers to fill in the nulls caused by the corresponding destructive effect of multipath.

Our contributions can be summarised as follows:

The rest of this paper is organized as follows: in Section 2, the ray reflection model is described to obtain the formulas that will be used to represent the geometrical environment of the low-angle target. In Section 3, the model of OFDM measurement for an extended target case, including multipath effect, has been presented. An extended target model with multiple approximately fixed scattering centers has been considered and assumed that the target may have a bulk velocity. In Section 4, the frequency diversity of OFDM waveforms has been utilized, and a recursive low-angle target tracking method is presented to mitigate multipath nulls. Simulation results are presented in Section 5 for selected experiments to illustrate the excellent performance of the proposed target tracking algorithm for low grazing angle scenarios. Finally, we summarize and conclude the paper in Section 6.

We use the generalized likelihood ratio test (GLRT) detector which, had been derived in [33] for the considered hypothesis testing problem.

In this section, we present a recursive low-angle target tracking method to mitigate multipath nulls. We show that using frequency diversity of OFDM waveforms, and we can fill multipath nulls.

In this section, an adaptive waveform design approach has been presented for designing the spectrum of the OFDM signal so that its complex weights match with the target and interference PSD. The maximization of the mutual information between unknown target impulse response and the received echoes as a function of the transmitted signal. This criterion is applied in this paper to design the complex weights of the transmitted signal and consequently improve the target tracking in low grazing angle scenarios.

We use a closed-loop amplitude monopulse target tracking method that utilizes the frequency diversity of OFDM signals to fill in multipath nulls. The target elevation angle by the amplitude monopulse method can be estimated as
$$\begin{array}{*{20}l} \hat{\theta_{d}}=\frac{1}{k_{m}}Re\left(\frac{\Delta}{\Sigma}\right) \end{array} $$
(29)

where km is the monopulse slope constant. It was shown that when the phase difference between the direct signal and reflected signal are in phase or out of phase will lead to destructive interference and consequently severe angle error estimation in the monopulse method.

The path length difference between the direct and reflected paths is a function of radar antenna height and target range and altitude. For a fixed set of these parameters, the amount of constructive or destructive interference is a function of RF carrier frequency. Operational radars attempt to mitigate nulls by transmitting a different RF carrier frequency from scan to scan.

It was shown in [20] that a sufficient change in the frequency will lead to decorrelate the phase measurement and make the measurement independent. With this assumption, the frequency spacing should be equal to
$$\begin{array}{*{20}l} \Delta f (Hz)=\frac{c(m/s)}{2D(m)} \end{array} $$
(30)

where D is the depth of the target. In this paper, we propose a narrowband OFDM signal that by transmitting multiple, parallel RF subcarriers simultaneously in a single pulse succeeds in filling multipath nulls. In the simulations, we have assumed that D = 15 m and Δf = 10 MHz will be obtained. On the other hand, the distance between the sub-carriers is the same, so it can result in frequency autonomy and frequency diversion to eliminate the multipath nulls. By transmitting a multicarrier OFDM signal with a bandwidth of a least that given by (30) should ensure that some of the subcarriers experience constructive interference or a peak while some may experience a null.

The proposed procedure for low-angle target tracking under multipath scenarios is indicated in Algorithm 1. 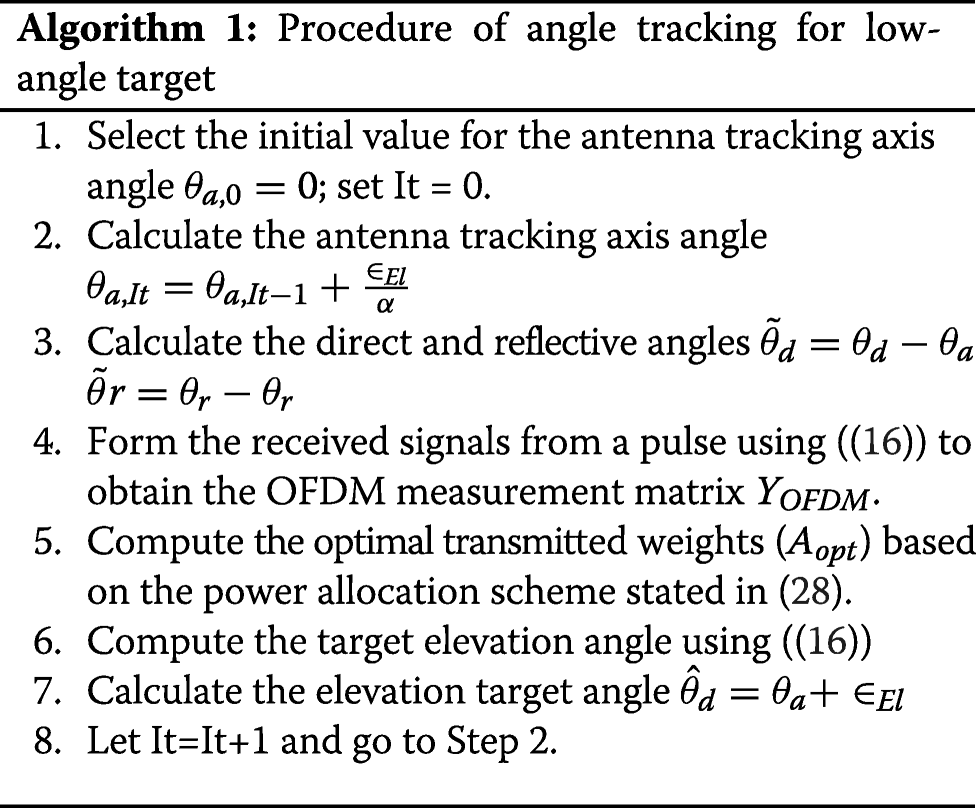 In this section, we consider several numerical examples to illustrate the performance of the proposed low grazing angle target approach. First, a description of the simulation setup is provided. The stochastic extended target involves a large number of scatterer points that are considered to move toward the radar with constant velocity and height, and its range varies from 8 km to 30 km. The scattering coefficients of the target (i.e., the entries of X) are taken from a Gaussian ensemble with known PSD (\(C\mathcal {N}(0, C_{X})\)). Then the scattering coefficients will be scaled to satisfy the required SNR. In each iteration, 1000 runs of the Monte Carlo simulation are performed, and the root mean square error (RMSE) of the estimated target elevation angle is computed at every 500 meter intervals.

Simulation Parameters for radar and environment are chosen as follow:

We present a recursive low-angle target tracking method using OFDM waveforms. The various simultaneous subcarrier frequencies will ensure that at least several subcarriers will always be outside multipath nulls on a given detection attempt to provide near-constant target visibility. We evaluate the performance of the proposed tracking algorithm via several simulations in the white Gaussian noise condition. The estimation performance is examined over 1000 Monte Carlo trials, and the RMSE of the estimated AOAs can be given at different target distances.

Operational radars attempt to mitigate nulls by transmitting a different RF carrier frequency from scan to scan. This solution comes at the expense of the potential increase in time to detect a target. This paper addresses the use of an OFDM radar waveform to provide a more uniform detection coverage in the presence of multipath propagation by transmitting multiple, parallel RF subcarriers simultaneously in a single pulse to fill in the nulls. Simulation results justify this issue and show the importance of adaptive OFDM waveform design in low gazing angle target tracking scenarios.

In this paper, we addressed an edge computing problem of target tracking in a low grazing angle with OFDM radar. First, to make the propagation model more accurate, we incorporated realistic physical and statistical effects. Then, based on the characteristic of the OFDM radar system and the multipath propagation model, we developed an OFDM measurement model and derived a GLRT detector. And then, an adaptive design algorithm was proposed based on maximizing mutual information to enhance the detection performance to design the complex weights of the transmitted waveform. And finally, we showed that the detection performance is improved due to the multipath utilization as well as the adaptive design method. We also demonstrated that the detection process of multicarrier radar waveforms outperforms the single-carrier OFDM radar waveform. Simulation results showed that by using the proposed OFDM waveform, the target tracking performance had been significantly improved in low grazing angle scenarios. In the future, we will explore other different criteria, e.g., ambiguity function, minimum mean square error, etc., to optimally design the transmit waveform to improve the tracking accuracy.

VK and RM have completed the first draft of this paper. VK and RM participated in mathematical design of the proposed method and its computer implementation. VK and MK coordinated industrial application and raw data preparation, and helped out for study. All authors have read and approved the manuscript.