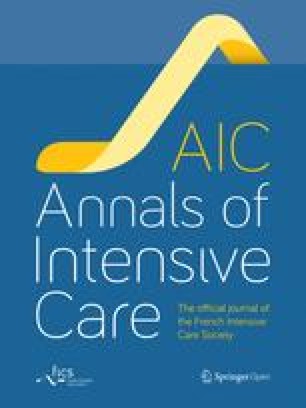 The diagnosis of these infections is based on chest X-ray, which is not specific in detecting new infiltrates in critically ill patients. Therefore, the CDC recommended using a new definition for ventilator-associated events (VAE), including infectious and other conditions. This definition includes only objective criteria and is perfectly reproducible [4]. However, recent studies and meta-analysis reported poor agreement between VAE, including ventilator-associated conditions (VAC), infection-related ventilator-associated complications (IVAC), or probable VAP (pVAP) [5, 6, 7]. Few studies evaluated the agreement between VAE and VA-LRTI, including VAP and VAT. Although VAP and VAT are both associated with increased duration of mechanical ventilation and length of ICU stay, only VAP is associated with increased mortality rates [8]. Thus, it is probably important to distinguish VAP from VAT. In addition, the recent ATS/IDSA guidelines on VAP recommended not treating VAT patients with antimicrobial, based on the low quality of the available evidence [9]. Therefore, we conducted this retrospective analysis of prospectively collected data to determine the agreement between VAE and VA-LRTI, including VAP and VAT. We also aimed to determine the impact of VAE on outcomes, including duration of mechanical ventilation, length of ICU and hospital stay, and mortality.

VA-LRTI included VAP and VAT. VAP was defined as pneumonia diagnosed after 48 h of intubation and mechanical ventilation. The diagnostic criteria for VAP included a new infiltrate on chest X-ray associated with at least two of the following: body temperature ≥ 38.5 °C or < 36 °C; leukocyte count ≥ 10 × 109/L or < 1.5 × 109/L; and purulent tracheal aspirate or sputum. In addition, a microbiological confirmation was required for all patients (positive endotracheal aspirate culture ≥ 105 colony-forming units (cfu)/mL or positive bronchoalveolar lavage culture ≥ 104 cfu/mL) [9]. VAT was defined using the same criteria as for VAP, except the presence of new or progressive pulmonary infiltrate. VAE were diagnosed according to CDC definition (Additional file 1: Figure S1). VAE diagnosis was considered concordant with that of VAT or VAP, when these infections occurred within 2 days before or after the alteration of PEEP or FiO2 (Additional file 1: Figure S2).

A VAP prevention strategy was routinely used during the study period. The ventilator circuit was not changed routinely. Sedation and weaning were based on a written protocol. A minimal positive end expiratory pressure of 5 cm H2O was used in all patients. Oral cavity was cleaned with chlorhexidine thrice daily. Cuff pressure was measured and adjusted (25 cm H2O) by nurses thrice a day. Tracheal suctioning was routinely performed by nurses, using an open tracheal suction system. Patients remained in semi-recumbent position, and received enteral nutrition based on a written protocol.

Data related to VAP and VAT episodes were prospectively collected. Data regarding mechanical ventilation (PEEP and FiO2) were automatically imported every hour in the patient management software ICIP® (Philips Healthcare). Data from 2-h time slots were then retrospectively examined to determine the episodes of VAE. Other data such as body temperature, leukocytosis, antibiotic use, patient characteristics, aetiology of VAE episodes, duration of mechanical ventilation and hospitalization, and mortality were collected retrospectively from patients’ computerized medical records.

The incidence rate and Cohen’s kappa coefficients were calculated on all episodes of VAE, VAP and VAT. The concordance between the diagnosis for VAC, IVAC, pVAP and that of VAP and VAT was determined by Cohen’s kappa statistic [10].

Only first episodes were taken to examine patients’ characteristics according to the occurrence of VAE, VAP and VAT. Qualitative variables were expressed in percentage. Because of non-normal distribution, quantitative variables were expressed in median, 25th and 75th percentiles. Chi squared test, or Fisher’s exact test; and Mann–Whitney U test, or Kruskal–Wallis test, were used to compare the qualitative and quantitative variables, respectively. The difference was considered significant when p < 0.05. When a significant difference existed between patients with VAP, VAT, and those with no VA-LRTI, comparisons between different groups were performed: VAP vs VAT, VAP vs no VA-LRTI and VAT vs no VA-LRTI.

Incidence of VAE and VA-LRTI

Correlation between VAE and VA-LRTI

Patient characteristics based on VA-LRTI

Characteristics of patients who presented VAT, VAP, or no VA-LRTI are presented in Table 2. A significant difference was found between the three groups regarding male gender, age, neurologic failure at ICU admission, and immunosuppression. Median duration of mechanical ventilation before VAT, and VAP occurrence was 9 (5, 13), and 7 (4, 13) days, respectively.
Table 2

Patient characteristics at ICU admission, based on the presence of ventilator-associated lower respiratory tract infections

* Significant difference between VAT and no VA-LRTI groups

#Significant difference between VAP and no VA-LRTI groups

Patient characteristics based on VAE

Patient characteristics at ICU admission, based on the presence of ventilator-associated events

* Significant difference between VAT and no VA-LRTI groups

#Significant difference between VAP and no VA-LRTI groups

Outcomes based on VAE

Although duration of mechanical ventilation and length of stay were significantly higher in patients with VAC, IVAC, or pVAC, as compared with those without these conditions, no significant difference in mortality was found between these different groups (Table 5). In multivariate analysis, the occurrence of VAE, or of VA-LRTI was not associated with mortality (Table 6).
Table 5

The strengths of our study include the large number of included patients (n = 1059) and ventilator days (n = 15,029), and the prospective evaluation of all VA-LRTI, including VAT. Previous studies reported similar findings regarding the correlation between VAE and VAP [6, 11, 12]. However, few studies prospectively evaluated the incidence of VAT in patients with VAE [11, 13]. Among the 262 diagnosed episodes of VAE, only 6 (2%) were possibly related to VAT. Thus, the correlation between VAE, and VAT could not be calculated. In a retrospective analysis of prospectively collected data, Bouadma et al. [11] identified aetiologies of each episode and found only 1% of VAC caused by tracheobronchitis.

Worsening of ventilatory parameters is not a mandatory criterion for VA-LRTI definition, and only the Clinical Pulmonary Infection Score (CPIS) includes the alteration of the PaO2/FiO2. Our study and previous studies [5, 11] reported that an important percentage of VAE episodes were possibly related to VAP, and not to VAT. This clearly suggests that using alteration of oxygenation, i.e. PaO2/FiO2, could be helpful in differentiating VAP from VAT. Differentiating these two infections could be a difficult task, as the accuracy of chest X-ray in diagnosing new infiltrates is low [14, 15, 16]. However, it is still important to differentiate them, as antibiotic treatment is not recommended for VAT and inappropriate use of antimicrobials is a risk factor for subsequent emergence of multidrug-resistant bacteria [17, 18]. Previous large observational studies and two small randomized controlled trials suggested beneficial effects of systemic and inhaled antibiotics. However, several limitations preclude definite conclusions on the interest of antimicrobials in patients with VAT, and further large multicentre randomized controlled trials are required.

The incidence of VAE in our study is in line with previous findings. However, the incidence of VAP (21%) is somehow higher than that reported by recent studies [19]. This could be explained by the fact that only patients receiving mechanical ventilation for > 4 days were included in our study.

VAE diagnosis algorithm is based on objective criteria and easy to use in routine in mechanically ventilated patients. However, the clinical relevance of VAE is not clear. First, our study and previous ones clearly showed that applying a VAE algorithm surveillance is not accurate in detecting VA-LRTI. Second, the impact of a ventilator bundle on VAE incidence is unknown. Few studies have focused on the preventability of VAE, but it seems that bundles applied for VAP prevention are not completely effective for VAE prevention [20, 21, 22]. Our results show that many VAE were non-infectious events as atelectasis, pleural effusion or acute pulmonary embolism. This might explain why ventilator bundles are not effective in preventing VAE, and should not be used to assess the quality of care in mechanically ventilated patients.

VAE algorithm failed in identifying most of VAT and 73% of VAP episodes and should not be used to start an empirical treatment of VA-LRTI. Furthermore, the retrospective nature of VAE does not allow its use at bedside. In fact, to meet IVAC criteria, patients must have 2 days of stable oxygenation parameter and 2 days of worsening ventilatory settings after which a new antibiotic must be prescribed for at least 4 days.

Our study has some limitations. First, it was performed in a single center, and its results may not be generalized to all ICU patients. Second, it was retrospective. However, all VA-LRTI were prospectively identified. Third, no data were collected on duration of antibiotic treatment before VA-LRTI, and VAE, neither on appropriateness of antibiotic treatment in patients with VA-LRTI. Fourth, the definition of VAT and VAP was based on chest X-ray that was interpreted by physicians in charge and no blind interpretation was performed. The prolonged duration of mechanical ventilation reported in patients with VA-LRTI, or VAE, as compared to those with no infection, or no VAE could not be attributed to these events as no adjustment was performed.

VAE and VA-LRTI are common in mechanically ventilated critically ill patients, and have a significant impact on duration of mechanical ventilation and length of stay. VAE are moderately correlated to VAP, and not correlated to VAT. Our results suggest that VAE should not be used as a marker of quality of care or to start empirical antibiotic treatment.

SN, and AR designed the study. OP, and SN performed statistical analyses. All authors collected the data, contributed in interpretation of the results, drafted and approved the submitted manuscript. SN had full access to the data and takes the responsibility for the integrity of the data and the accuracy of the data analysis. OP and SL contributed equally to this study. All authors read and approved the final manuscript.

The IRB of the Lille University Hospital approved the study and waived informed consent. In accordance with the French law, and because of the retrospective observational design, written informed consent was not required.