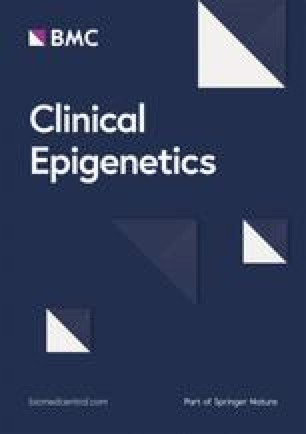 Yingge Liu and Meiying Zhang contributed equally to this work.

To identify the genetic differences between ESCC and EAC, Agrawal et al. performed exomic sequencing on 11 cases of EAC and 12 cases of ESCC from the USA. Interestingly, inactivating mutations of NOTCH1 were identified in 21% of ESCCs but not in EACs. Notably, NOTCH1 mutations were more frequent in North American ESCCs (11 of 53) compared to ESCCs from China (1 of 48 cases) according to Sanger sequencing validation [6]. Using whole genomic sequencing of ESCC samples from China, Song et al. found that somatic aberrations are mainly involved in the Notch, Wnt, and cell cycle pathways [7]. In addition to NOTCH1 mutations, Hu et al. revealed frequent mutations in PIK3CA and PTEN in ESCC [8].

Epigenetics stands at the interface of the genome, development, and environmental exposure [9]. DNA methylation is the most useful epigenetic marker for human disease studies because it is stable [10]. A great deal of epidemiologic evidence supports a relationship between dietary exposure in early life and long-term health [11]. Moreover, diet can cause profound changes in the epigenome, leading to human disease [9]. Aberrant DNA methylation has been reported in genes involved in cell cycle, DNA damage repair, Wnt, TGF-β, and NF-κB pathways [12, 13].

The insulin-like growth factor binding proteins (IGFBPs) bind to insulin-like growth factors (IGFs) and regulate their functions. Based on differential affinities to insulin growth factors (IGFs), IGFBPs are classified into two groups: IGF high-affinity binding proteins (IGFBP1-6) and IGF low-affinity binding proteins, such as IGFBP-related proteins (IGFBP-Rp1-10). IGFBP like protein1 (IGFBPL1) is another member of IGFBPs family [14, 15]. IGFBPL1 was reported to be involved in neural development through PI3K signaling [16]. The expression of IGFBPL1 was reduced in breast cancer, and its expression was regulated by promoter region methylation [17]. The expression and function of IGFBPL1 in esophageal cancer remain to be elucidated.

A total of 501 cases of ESCC, 114 cases of esophageal dysplasia, and 5 cases of normal esophageal mucosal were collected from the Chinese PLA General Hospital in Beijing. The collection of all samples was based on the approval and guidelines of the Institutional Review Board of the Chinese PLA General Hospital. Among ESCC patients, 316 cases were male and 185 cases were female. The median age was 63 years old (range 41–87 years old). All cancer samples were classified according to the TNM staging system (AJCC2018), including tumor stage I (n = 30), stage II (n = 112), stage III (n = 333), and stage IV (n = 16). Eight esophageal cancer cell lines were employed in this study, including Bic1, KYSE140, KYSE410, KYSE450, KYSE150, KYSE520, KYSE510, and COLO680N cells. All cell lines were previously established from primary esophageal cancer and maintained in 90% RPMI media 1640 (Invitrogen, CA, USA) supplemented with 10% fetal bovine serum. Cells were passaged 1:3 when total confluence (~ 106cells) was reached in a 75 cm2 culture flask (NEST Biotechnology, Jiangsu, China).

First-strand cDNA was synthesized according to the manufacturer’s instructions (Invitrogen, Carlsbad, CA, USA). A total of 5 μg RNA was used to synthesize the first-strand cDNA and diluted to 100 μl. Subsequently, 2 μl of diluted cDNA mixture was used for PCR amplification in a final 25-μl reaction volume. PCR primer sequences for IGFBPL1 were as follows: 5′-GTGAGGGCTGTGCCTACCC-3′ (F), 5′-CATCA CATGCGGTCATCGGG-3′ (R). PCR amplification was for 35 cycles, and the length of products is 308 bp. The primers for GAPDH were as follows: 5′-GACCACAGTCCATGCCATCAC-3′ (F), and 5′-GTCCACCACCCTGTTGCTG TA-3′ (R). As an internal control, GAPDH was amplified for 25 cycles. The amplified PCR products were examined by 2% agarose gels.

IGFBPL1 unexpressed and stably expressed cells (KYSE150 and KYSE410) were seeded at 400 cells per well in 6-well culture plates in triplicate. Before and after the knockdown of IGFBPL1, KYSE510 cells were seeded in 6-well plates at a density of 400 cells per well. After 12 days, cells were fixed with 75% ethanol for 30 min and stained with 0.2% crystal violet. The number of clones was then counted. Each experiment was repeated three times.

Cells were plated into 96-well plates at a density of 2.5 × 103 cells per well, and cell viability was measured by the methyl thiazolyl tetrazolium (MTT) assay (KeyGEN Biotech, Nanjing, China) at 0, 24, 48, and 72 h. Absorbance was measured on a microplate reader (Thermo Multiskan MK3 [Thermo Fisher Scientific, Danvers, MA, USA]) at a wavelength of 490 nm.

IGFBPL1 unexpressed and re-expressed KYSE150 and KYSE410 cells were starved for 12 h and then stimulated with 10% FBS for 24 h. Cells were fixed with 70% ethanol and treated using the Cell Cycle Detection Kit (KeyGEN Biotech). The cells were then analyzed by a FACS Caliber flow cytometer (BD Biosciences, Franklin Lakes, NJ, USA). The same method was used to analyze KYSE510 cells before and after IGFBPL1 knockdown. Cell phase distribution was analyzed using MODFIT software (Verity Software House, ME, USA). KYSE150 and KYSE410 cells were transiently transfected with pcDNA3.1+ and pcDNA3.1+ IGFBPL1 vectors. Cell apoptosis was analyzed by FITC Annexin V assay kit according to the manufacturer’s instructions (BD Bioscience, Franklin). Apoptosis of KYSE510 cells with or without knockdown of IGFBPL1 was also analyzed. Each experiment was repeated three times.

The unexpressed and stably expressed KYSE150 cells (4 × 106 cells in 0.15 ml phosphate buffer) were injected subcutaneously into the right dorsal side of female Balb/c nude mice of 4 weeks old (n = 5). Tumor volume was measured every 4 days for 24 days starting 4 days after implantation. The tumor volume was calculated according to the V = L × W2/2 formula, where V represents the volume (mm3), L represents the largest diameter (mm), and W represents the minimum diameter (mm). All procedures were approved by the Animal Ethics Committee of the Chinese PLA General Hospital.

RNA-Seq data for expression of IGFBPL1 in the esophageal cancer tissue dataset were downloaded from the Tumor Genome Atlas (TCGA) (http://xena.ucsc.edu/, 04/6/2019). IGFBP1-6 RNA expression data were extracted from the Tumor Genome Atlas (TCGA) dataset for esophageal cancer tissue samples and IGFBP1-6 RNA expression data for normal esophagus were extracted from GTEx (http://xena.ucsc.edu/, 21/12/2019). Statistical analysis was performed using SPSS 17.0 software (SPSS, Chicago, IL, USA). All data are presented as means plus or minus SD and analyzed using the Student’s t test. The chi-square test and the Fisher’s exact test were used to analyze the association between IGFBPL1 methylation status and clinicopathologic factors, as well as the association between IGFBPL1 expression and methylation status. A p < 0.05 was considered to be statistically significant.

IGFBPL1 is frequently methylated in human esophageal dysplasia and ESSC

The association of IGFBPL1 methylation and clinical factors in human ESCC

Flow cytometry was used to analyze the effect of IGFBPL1 on apoptosis. The ratios of apoptotic cells in IGFBPL1 unexpressed and re-expressed cells were 13.18 ± 0.18% vs. 23.88 ± 0.15% (t test, p < 0.001) in KYSE150 cells and 10.32 ± 0.17% vs.19.28 ± 0.14% (t test, p < 0.01) in KYSE410 cells (Fig. 3c). The proportion of apoptotic cells increased significantly after re-expression of IGFBPL1 in KYSE150 and KYSE410 cells. The percentage of apoptotic cells before and after knockdown of IGFBPL1 in KYSE510 cells was 30.06 ± 0.12% vs. 18.87 ± 0.14% (t test, p < 0.01, Fig. 3c). The percentage of apoptotic cells was significantly reduced after knockdown of IGFBPL1. To further verify the effect of IGFBPL1 on apoptosis of esophageal cancer cells, the expression levels of caspase-3, cleaved-caspase-3, and Bcl-2 in esophageal cancer cells were analyzed. As shown in Fig. 3f, the levels of caspase-3 decreased and the levels of cleaved-caspase-3 and Bcl-2 decreased after IGFBPL1 was re-expressed in KYSE150 and KYSE410 cells. Meanwhile, the levels of caspase-3 and Bcl-2 increased and the levels of cleaved-caspase-3 decreased after knockdown of the IGFBPL1 in KYSE510 cells (Fig. 3e, f). These results further suggested that IGFBPL1 induces apoptosis in esophageal cancer cells.

Insulin-like growth factor (IGF) signaling plays important roles in regulating growth and development in normal human tissues by promoting cellular proliferation and differentiation and preventing apoptosis [24, 25]. IGF-1 and IGF-2 are members of the insulin superfamily of growth-promoting peptides and are among the most abundant and ubiquitous polypeptide growth factors [26]. Increased levels of IGF-1 and IGF-2 are associated with many cancers, including esophageal cancer [27, 28, 29, 30].

The IGFs are distinguished from insulin by their interaction with six high-affinity IGFBPs [31]. In addition to modulating IGF bioactivity, IGFBP family members have biological actions independent of their abilities to bind IGFs, including binding to a variety of extracellular and cell surface molecules [27]. IGFBPs are cysteine-rich proteins that bind to IGFs with high affinity, thereby enhancing or inhibiting the IGF signaling pathway in a cell-type-dependent manner [15]. Increased expression of IGF1R, IGFBP3, IGFBP4, IGFBP7, and IGFBP8 was reported in human esophageal cancer, while the expression of IGFBP2 and IGFBP6 was reduced [32, 33, 34, 35]. While the levels of IGFBP1-6 mRNA expression in TCGA and GTEx database are different with other reports, the expression of IGFBP1 and IGFBP3 were increased in ESCC compared to normal tissue samples (all p < 0.001). The expression of IGFBP5 and IGFBP6 were reduced in ESCC compared to normal tissue samples (all p < 0.001). No significant expression changes were found in IGFBP2 and IGFBP4 in ESCC and normal tissue samples (all p > 0.05). No association was found between IGFBPs expression and overall survival in ESCC patients (all p > 0.05, data not shown). We further evaluated IGFBP1-6 expression in esophageal cancer cells by RT-PCR. Loss of IGFBP1-5 expression was frequently found in esophageal cancer cells, while IGFBP6 was expressed in all cell lines (data not show). To date, no cancers have been attributed to IGFBP mutation [36]. IGFBPL1 was identified in 1997 (Fujimoto, GenBank Submission, 1997) and is located on chromosome 4 in mouse and chromosome 9p13.1 in humans. The IGFBPL1 gene was reported to be frequently methylated in human breast cancer and regulated by promoter region methylation, and methylation of IGFBPL1 was associated with poor prognosis [17].

We are grateful to Su Xiaomo for preparing for the experiments.

YL and MZ conducted research and analyzed the data. The manuscript was written by YL, MZ, and MG. MG has made significant contributions to the concept and design of this research. YL oversaw the study. All authors read and approved the final manuscript.

This study was approved by the Institutional Review Board of the Chinese PLA General Hospital.

We confirm that all authors agree with the submissions currently (and thereafter).