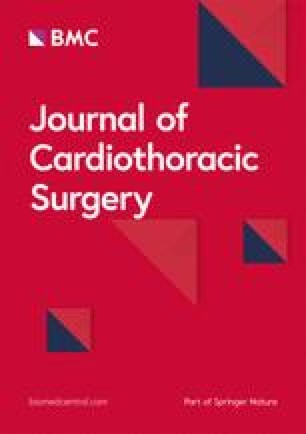 The present study aimed to evaluate the value of admission serum uric acid (UA) level in predicting in-hospital risk of death in patients with acute type A aortic dissection (AAAD).

Elevated serum UA level on admission is an independent predictor of in-hospital mortality in patients with AAAD.

Despite improvements in surgical technique, the early mortality after surgery for acute type A aortic dissection (AAAD) remained as high as high as 8–25% [1, 2]. Several laboratory indexes on admission such as D-dimer [3, 4, 5], C reactive protein (CRP) [3], fibrinogen [6], platelet count [7], and white blood cell count (WBC) [8] have been proven to be associated with early mortality in patients with aortic dissection.

Serum UA level has been found associated with total antioxidant capacity and ascending aorta dilatation [16]. It has also been shown that serum UA levels are significantly higher in patients with aortic dissection than those in healthy controls [17]. Those studies suggested that elevated serum UA level might contribute to the pathogenesis of aortic aneurysm and aortic dissection. However, so far, no study has examined the prognostic significance of UA in AAAD, and the relationship between preoperative serum UA and mortality after surgery for AAAD remains unknown.

The present study aimed to evaluate the value of serum UA level in predicting in-hospital risk of death in patients with AAAD.

This study was approved by the ethics committee of our hospital on 7th July, 2019 (reference number: 2019–1094) and the need for individual consent was waived due to its retrospective nature. We consecutively enrolled 186 patients with AAAD who underwent thoracic aortic surgery between January 2016 and June 2019 at the First Affiliated Hospital, School of Medicine, Zhejiang University in China. Aortic dissection was diagnosed according to medical history, physical examination and computed tomography. The aortic dissection is considered as AAAD if the time from the onset of the symptom to operation is within 14 days.

The study endpoint was defined as all-cause mortality during hospitalization.

The procedures were performed via median sternotomy. Cardiopulmonary bypass was established with right axillary artery for arterial cannulation site, and right atrium for venous cannulation site. The extent of distal aortic resection was determined based on the location of the entry tear, aortic diameter and the false lumen status of the downstream aorta. Deep hypothermic circulatory arrest (nasopharyngeal temperature 20 °C) with antegrade cerebral perfusion was used in total arch replacement. Bentall procedure or valve-sparing reimplantation was performed in patients with aortic root dilation or an intimal tear at the aortic root level.

A forward conditional logistic regression was performed to identify independent risk factors for in-hospital death. Variables were allowed to enter at p value< 0.05 and be retained only if they remained significant at p value < 0.10.

Receiver operating characteristic (ROC) analysis was performed to assess the most clinical useful level of serum uric acid for predicting postoperative in-hospital mortality. A cute-off value for the highest Youden index (sensitivity+ specificity-1) was identified. Calculation of the area under the receiver operating characteristic curve (AUC) was used to compare the predictive value of different variables. A combined ROC curve was calculated based on the logistic regression.

Clinical characteristics of patients with AAAD

Predictive value of UA, D-dimer and Age for in-hospital mortality

UA is the final product of purines metabolism. Endogenous UA synthesis occurs mostly in the liver, kidney, intestine and vascular endothelium, while the exogenous purine pool derived from animal proteins and fructose catabolism [18]. Xanthine oxidoreductase is the most critical enzyme in purine metabolism, which is also one of the most important producers of reactive oxygen species (ROS) [19]. Increased level of UA is associated with increased xanthine oxidoreductase activity, which leads to increased oxidative stress [20]. UA is finally excreted by kidney and intestine.

The effects of UA on pathophysiology, morbidity and prognosis of cardiovascular disease have been indicated by a variety of studies. Several studies suggested the relationship between UA and pathological process such as oxidative stress [11], systemic inflammation [12], and activation of the renin-angiotensin system [11], which further lead to endothelial dysfunction [10], vascular smooth muscle cells proliferation [11] and increased arterial stiffness [21]. Clinical studies also indicated the association between UA and several cardiovascular diseases such as hypertension [22], coronary artery disease [23], heart failure [24] and atrial fibrillation [25]. Increased UA level was also found to be risk factor of cardiovascular disease mortality [13], poorer outcome after coronary artery bypass grafting and cardiac valve surgery [14, 15].

The potential mechanisms underlying the predictive role of elevated serum UA on in-hospital mortality of AAAD may be multifactorial. It has been indicated that increased serum UA was an independent risk factor of renal disease [27], and it has been suggested that preoperative renal insufficiency was a stronger predictor of hospital mortality in elective aortic arch replacement surgery [28]. However, through multiple regression analysis, we found that the prognostic utility of UA was independent of renal function, which suggested that there might be independent mechanisms of UA involved in the prognosis of AAAD patients who underwent surgery. UA is converted from xanthine in an oxidation reaction catalyzed by xanthine oxidoreductase [9], and xanthine oxidoreductase is one of the most important producers of reactive oxygen species [19]. Therefore, elevated level of serum UA may identify a subgroup of patients with high xanthine oxidoreductase activity, which related to a higher state of oxidative stress, and those patients may suffer from more serious ischemia-reperfusion injury during surgical repair of AAAD. Our subgroup analysis showed that in the subgroup of total arch replacement, UA was significantly associated with in-hospital death, however, in patient underwent ascending aorta replacement or hemiarch replacement, UA was no longer associated with in-hospital death. This finding indicates a potential interaction effect of elevated UA level and deep hypothermic circulatory arrest on mortality of AAAD patients. It is widely accepted that deep hypothermic circulatory arrest causes multiple organ dysfunction through ischemia-reperfusion injury, which can increase morbidity and mortality [29]. Elevated serum UA level, which represented a higher state of oxidative stress, may identified a group of patients who are more likely to suffer from serious ischemia-reperfusion injury during deep hypothermic circulatory arrest. Further studies are needed to clarify the underlying mechanisms of UA as a biomarker for morbidity and mortality of aortic dissection. More research is required to determine whether inhibiting xanthine oxidoreductase can be an effective way to reduce mortality after surgical repair of AAAD.

The limitation of the present study is that it is a single center research with relatively small sample size. In subgroup analysis, the sample size of “ascending aorta/hemiarch replacement” group could not provide the adequate statistic power to support the negative conclusion (power = 7.504%). Thus, further multicenter studies with larger sample size were still needed to achieve a more detailed analysis.

The present study shows for the first time that in patients with AAAD receiving surgical repair, elevated admission serum UA level was an independent risk factor of in-hospital mortality. Serum UA may be a promising marker for risk stratification in patients with AAAD.

This study was approved by the ethics committee of First Affiliated Hospital, College of Medicine, Zhejiang University on 7th July, 2019 (reference number: 2019–1094) and the need for individual consent was waived due to its retrospective nature.