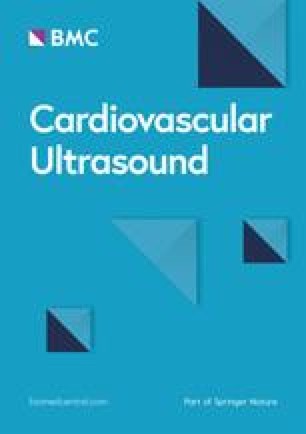 Pulmonary annular velocity waveforms comprised systolic bimodal (s1′ and s2′) and diastolic e’ and a’ waves in all participants. The peak velocities of s1′, s2′, and e’ were significantly lower in the VSD group than in the Control group. On multiple regression analysis, sPAC was an independent variable affecting the peak velocities of the s1′, s2′, and e’ waves (β = 0.41, 0.62, and 0.35, respectively). The dPAC affected the s1′ wave peak velocity (β = 0.34). The time durations of the s1′ and e’ waves were independently determined by the sPAC (β = 0.49 and 0.27).

We have previously reported that the pulmonary annular motion velocity waveform obtained using tissue Doppler imaging (TDI) reflects right ventricular outflow tract (RVOT) performance [9]. In the present study, we hypothesized that the pulmonary annular motion would be affected not only by RVOT function, but also by PA capacitance because the pulmonary annulus is located adjacent to the RVOT and PA. In large arteries, deformation of the arterial wall during systole and diastole occurs in the radial and longitudinal directions (Additional file 1). The present study attempted to assess the relationship between the longitudinal pulmonary arterial deformation and capacitance.

The aim of this study, therefore, was to determine whether tissue Doppler-derived pulmonary annular motion velocity can be used as a noninvasive assessment of PA capacitance in children with ventricular septal defect (VSD).

The prospective study group comprised consecutive 35 pediatric patients with a preoperative VSD (VSD group; mean age, 2.3 ± 1.5 years; range, 0.6–5.0 years). These patients were scheduled for surgical closure. Twenty-three age-matched healthy children without electrocardiographic or echocardiographic abnormalities (Control group; age, 2.5 ± 1.6 years; range, 0.6–5.0 years) were also enrolled. The patients underwent cardiac catheterization within 3 days of assessment by echocardiography. Data collected between December 2012 and December 2015 were analyzed. All protocols were approved by the Institutional Review Board of the Tokushima University Hospital and conformed to the ethical guidelines of the Declaration of Helsinki (1975). The parents of all subjects provided their written, informed consent for their children to participate in the study.

Standard and pulsed Doppler tissue echocardiography proceeded using a Preirus digital ultrasound system (Hitachi-Aloka Medical Co., Tokyo, Japan) equipped with 1–5 and 3–7 MHz sector transducers. All Doppler data were acquired from patients in the left lateral decubitus position during shallow respiration or end-expiratory apnea. Pulmonary annular motion velocity was measured using TDI in the long-axis view of the RVOT and PA. Guided by the two-dimensional images, a sample volume with a fixed length of 5.0 mm was placed on the pulmonary annulus of the RV free wall side, as indicated by the yellow arrow [9]. Figures 1a and b show a representative example of the color TDI and profile of the pulmonary annular velocity in a healthy child. Furthermore, tricuspid annular motion was recorded in the four-chamber view for the sake of comparison (Fig. 1c). The ultrasound beam was positioned parallel to the direction of the pulmonary and tricuspid annular motions. All tissue Doppler parameters were measured during three consecutive heart cycles by a single physician who was blinded to patient condition, and mean values were calculated.

In addition to pulsed TDI, participants were assessed by conventional, two-dimensional, M-mode, pulsed, continuous, and color Doppler echocardiography. The left ventricular ejection fraction (LVEF) was calculated from apical two-chamber and four-chamber images using the biplane Simpson’s technique. All parameters were measured over three cardiac cycles and then averaged.

All data are expressed as means ± standard deviation (S.D.) or as medians with the 5th–95th percentiles. Statistical significance was determined using the Mann-Whitney U-test or Student’s t-test, as appropriate. Linear regression analyses were performed for correlations between the pulmonary annular motion velocity and hemodynamic parameters, and Pearson’s or Spearman’s correlation coefficients were calculated, as appropriate. Variables with p < 0.10 on univariate analysis were “candidates” for a backwards stepwise (inclusion criteria/exclusion criteria: p < 0.05/p > 0.1, respectively) multivariate analysis, and those with p < 0.05 were “retained” in the model. Multiple regression analysis was used to identify hemodynamic variables affecting the pulmonary annular motion waveform. All statistical data were calculated using Prism version 6.0 (GraphPad Software, San Diego, CA, USA) and JMP 11 (SAS Institute, Inc., Cary, NC, USA) installed on a desktop computer. A value of p < 0.05 was considered significant. Intra-observer and inter-observer reproducibilities of TDI measurements were assessed using Bland-Altman analysis in a blinded manner. Data were recorded and assessed at 5-minute intervals by observers 1 and 2 from 20 randomly selected participants (VSD, n = 10; Controls, n = 10). For intra-observer variability, data were analyzed twice, 8 weeks apart. Inter-observer variability was assessed by analyzing data from two separate observers blinded to each other’s results.

Clinical characteristics of the subjects

Recent reports demonstrated that PA capacitance has great impact on the prognosis in various cardiac diseases [5, 6, 7, 8]. Patients require lifelong follow-up that includes serial assessment of PA capacitance. Therefore, noninvasive assessment of PA capacitance is considered quite important. However, its assessment is challenging due to the difficulty of measurement and poor reproducibility. Therefore, an invasive method is necessary to accurately assess PA capacitance in clinical practice. Several studies have been conducted to identify noninvasive ways for estimating PA capacitance using echocardiographic parameters [13, 14]. These studies attempted echocardiographic estimation of PA capacitance from the PA pulse pressure and RV stroke volume. Systolic PA pressure was estimated from the tricuspid regurgitation velocity by the modified Bernoulli equation. RV stroke volume was calculated using the pulmonary valve diameter measured in the parasternal short-axis view and the velocity-time integral of the PA Doppler flow [13]. In other reports, the right pulmonary arterial diameter change during the cardiac cycle was used to calculate PA capacitance [14]. However, these methods are complex and time-consuming, errors can easily occur, and they have low reproducibility. Previous reports that attempted echocardiographic estimation of PA capacitance all had limitations due to poor reproducibility and difficulty, because accurate quantitative assessment by two-dimensional echocardiography is hampered by the complex geometry and difficult depiction. Pulmonary arterial wall strain evaluated by speckle tacking method can be a candidate for evaluating PA distensibility and capacitance. However, in our preliminary experimental study, the tracking was insufficient and the reproducibility was quite low. Therefore, nongeometric methods to assess PA compliance and PA deformation should be explored. One such method, TDI, allows the quantitative assessment of longitudinal PA deformation.

The sample cohort was relatively small, but TDI parameters were compared between patients and age-matched healthy individuals, and distinctive waveforms were found in the patient group. We postulated that PA expansion by the stroke volume and distensibility is similar in the radial and longitudinal directions. However, a directional difference might be present, which might generate systematic measurement error. The detailed characteristics of stiffness and elasticity in the PA radial and longitudinal directions should be elucidated in the future. Next, some degree of angulation between the Doppler beam and the true direction of longitudinal PA elasticity might exist. The long-axis view of the RVOT and PA was obtained, and the ultrasound beam was parallel to the direction of the pulmonary annular motions. We considered that this is the most appropriate cross-sectional view to observe the expansion and contraction of the PA.

This research received no grant from any funding agency in the public, commercial, or not-for-profit sectors.

Availability of data and material

All data generated or analysed during this study are included in this published article.

We also confirm that this study complied with the principles of the declaration of Helsinki. Study protocol was approved by the Institutional Review Board of the Tokushima University Hospital. The parents of all subjects provided their written, informed consent for their children to participate in the study.