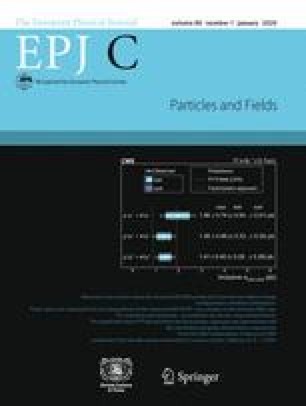 We apply the first law of thermodynamics to the apparent horizon of the universe with the power-law corrected and non-extensive Tsallis entropies rather than the Bekenstein–Hawking one. We examine the cosmological properties in the two entropy models by using the CosmoMC package. In particular, the first numerical study for the cosmological observables with the power-law corrected entropy is performed. We also show that the neutrino mass sum has a non-zero central value with a relaxed upper bound in the Tsallis entropy model comparing with that in the \(\Lambda \)CDM one.

It is known that a power-law corrected term from the quantum entanglement can be included in the black hole entropy near its horizon [14]. Interestingly, one can apply it to cosmology by taking it as the entropy on the horizon of the universe. On the other hand, the universe is regarded as a non-extensive thermodynamical system, so the Boltmann–Gibbs entropy should be generalized to a non-extensive quantity, the Tsallis entropy, while the standard one can be treated as a limit [15, 16, 17]. The Tsallis entropy has been widely discussed in the literature. In the entropic-cosmology scenario [18], the Tsallis entropy model predicts a decelerating and accelerating universe [19]. In addition, a number of works on the Tsallis holographic dark energy have been proposed and investigated [20, 21, 22, 23, 24]. In addition, the Tsallis entropy has also been used in many different dark energy models, such as the Barboza–Alcaniz and Chevalier–Polarski–Linder parametric dark energy and Wang–Meng and Dalal vacuum decay models [25]. Moreover, it is shown that modified cosmology from the first law of thermodynamics with varying-exponent Tsallis entropy can provide a description of both inflation and late-time acceleration with the same parameter choices [27]. In particular, the Tsallis entropy is proportional to a power of the horizon area, i.e. \(S_T \propto A^{\delta }\), when the universe is assumed to be a spherically symmetric system [28].

Although it is possible to modify Friedmann equations by just considering fluid with an inhomogeneous equation of state of the corresponding form [29], we still choose the thermo-dynaimical approach as that in Ref. [30], in which the authors considered the first law of thermodynamics of the universe with fixed-exponent Tsallis entropy and showed that the cosmological evolution mimics that of \(\Lambda \)CDM and are in great agreement with Supernovae type Ia observational data. In this paper, we examine the features of the modified Friedmann equations obtained by replacing the usual Bekenstein–Hawking entropy-area relation, \(S=A/4G\), with the power-law correction and Tsallis entropies [14, 15, 16, 17, 19, 20, 21, 22, 23, 24, 25, 26, 27, 28, 30], where G is the gravitational constant.

This paper is organized as follows. In Sect. 2, we consider the power-law corrected and Tsallis entropy models and derive the modified Friedmann equations and dynamical equation of state parameters by applying the first law of thermodynamics to the apparent horizon of the universe. In Sect. 3, we present the cosmological evolutions of the two models and compare them with those in \(\Lambda \)CDM. Finally, the conclusions are given in Sect. 4. The paper is written in units of \(c=\hbar =k_B=1\).

We use the flat Friedmann–Lemaître–Robertson–Walker (FLRW) metric:
$$\begin{aligned} ds^2=-dt^2+a^{2}(t)\Big (dr^2+r^2 d\Omega ^2\Big ), \end{aligned}$$
(2.1)
where a(t) is the scale factor. The modified Friedmann equations can be constructed by considering the first law of thermodynamics in the apparent horizon of the universe and using the new entropy area relation rather than the Bekenstein–Hawking one. We concentrate on two models: power law corrected entropy (PLCE) and Tsallis entropy cosmological evolution (TECE) models.

Priors for cosmological parameters in the PLCE and TECE models

As shown in Table 4, the best fitted \(\chi ^2\) value in the TECE model is 3018.96, which is smaller than 3019.28 in \(\Lambda \)CDM model. Although the difference between the value of \(\chi ^2\) in TECE and \(\Lambda \)CDM is not significant, it still implies that the TECE model can not be ignored. Clearly, more considerations and discussions are needed in the future.