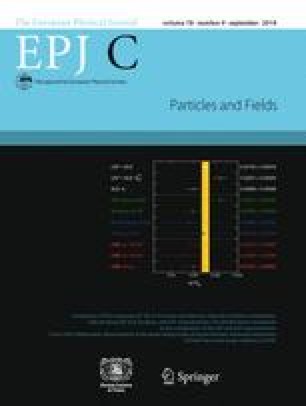 A search for pair production of heavy scalar leptoquarks (LQs), each decaying into a top quark and a \(\tau \) lepton, is presented. The search considers final states with an electron or a muon, one or two \(\tau \) leptons that decayed to hadrons, and additional jets. The data were collected in 2016 in proton–proton collisions at \(\sqrt{s}=13\,\text {Te}\text {V} \) with the CMS detector at the LHC, and correspond to an integrated luminosity of 35.9\(\,\text {fb}^{-1}\). No evidence for pair production of LQs is found. Assuming a branching fraction of unity for the decay \(\mathrm {LQ} \rightarrow \mathrm {t}\tau \), upper limits on the production cross section are set as a function of LQ mass, excluding masses below 900\(\,\text {Ge}\text {V}\) at 95% confidence level. These results provide the most stringent limits to date on the production of scalar LQs that decay to a top quark and a \(\tau \) lepton.

Leptoquarks (LQs) are hypothetical particles that carry non-zero baryon and lepton quantum numbers. They are charged under all standard model (SM) gauge groups, and their possible quantum numbers can be restricted by the assumption that their interactions with SM fermions are renormalizable and gauge invariant [1]. The spin of an LQ state is either 0 (scalar LQ) or 1 (vector LQ). Leptoquarks appear in theories beyond the SM such as grand unified theories [2, 3, 4], technicolor models [5, 6] and other compositeness scenarios [7, 8], and R-parity-violating (RPV) supersymmetric models [9, 10].

Third-generation scalar LQs (\(\mathrm {LQ}_3\) s) have recently received considerable theoretical interest, as their existence can explain the anomaly in the \(\mathrm {\overline{B}}\rightarrow \mathrm {D}\tau \overline{\nu } \) and \(\mathrm {\overline{B}}\rightarrow \mathrm {D}^* \tau \overline{\nu } \) decay rates reported by the BaBar [11, 12], Belle [13, 14, 15], and LHCb [16] Collaborations. These decay rates deviate from the SM predictions by about four standard deviations [17], and studies of the flavor structure of LQ couplings reveal that large couplings to third-generation quarks and leptons could explain this anomaly [18, 19, 20, 21]. Third-generation LQs can appear in models in which only third-generation quarks and leptons are unified [22, 23] and therefore their existence is not constrained by proton decay experiments. All models that predict LQs with masses at the TeV scale and sizable couplings to top quarks and \(\tau \) leptons can be probed by the CMS experiment at the CERN LHC.

In proton–proton (\(\mathrm {p}\mathrm {p}\)) collisions LQs are mainly pair produced through the quantum chromodynamic (QCD) quark-antiquark annihilation and gluon-gluon fusion s- and t-channel subprocesses as shown in Fig. 1. There are also lepton-mediated t- and u-channel contributions that depend on the unknown lepton-quark-LQ Yukawa coupling, but these contributions to \(\mathrm {LQ}_3\) production are negligible at the LHC as they require third-generation quarks in the initial state. Hence, the LQ pair-production cross section can be taken to depend only on the assumed values of the LQ spin and mass, and on the center-of-mass energy. The corresponding pair production cross sections have been calculated up to next-to-leading order (NLO) in perturbative QCD [24].

In this paper, Sect. 2 describes the CMS detector, while Sect. 3 discusses the data samples and the properties of simulated events utilized in the analysis. Section 4 outlines the techniques used for event reconstruction and Sect. 5 describes the selection criteria applied in each analysis channel. The method used for the background estimation is reported in Sect. 6, and systematic uncertainties are detailed in Sect. 7. Finally, Sect. 8 contains the results of the analysis, and Sect. 9 summarizes this work.

The central feature of the CMS apparatus [40] is a superconducting solenoid of 6\(\,\text {m}\) internal diameter, providing a magnetic field of 3.8\(\,\text {T}\). Within the solenoid volume are a silicon pixel and strip tracker, a lead tungstate crystal electromagnetic calorimeter (ECAL), and a brass and scintillator hadron calorimeter (HCAL), each composed of a barrel and two endcap sections. Forward calorimeters extend the pseudorapidity (\(\eta \)) coverage provided by the barrel and endcap detectors. Electron momenta are estimated by combining the energy measurement in the ECAL with the momentum measurement in the tracker. Muons are measured in gas-ionization detectors embedded in the steel flux-return yoke outside the solenoid. A more detailed description of the CMS detector, together with a definition of the coordinate system used and the relevant kinematic variables, can be found in Ref. [40].

Events of interest are selected using a two-tiered trigger system [41], where the first level is composed of custom hardware processors and selects events at a rate of around 100\(\,\text {kHz}\) within a time interval of less than 4\(\,\upmu \text {s}\). The second level, known as the high-level trigger, uses a version of the full event reconstruction software optimized for fast processing, and reduces the event rate to around 1\(\,\text {kHz}\) before data storage.

Event reconstruction is based on the CMS particle-flow (PF) algorithm [57], which combines information from all subdetectors, including measurements from the tracking system, energy deposits in the ECAL and HCAL, and tracks reconstructed in the muon detectors. Based on this information, all particles in the event are reconstructed as electrons, muons, photons, charged hadrons, or neutral hadrons.

Interaction vertices are reconstructed using a deterministic annealing filtering algorithm [58, 59]. The reconstructed vertex with the largest value of summed physics-objects \(p_{\mathrm {T}} ^2\) is taken to be the primary \(\mathrm {p}\mathrm {p}\) interaction vertex. The physics objects are jets, clustered using the jet finding algorithm [60, 61] with the tracks assigned to the vertex as inputs, and the associated missing transverse momentum, taken as the negative vector sum of the \(p_{\mathrm {T}}\) of those jets. Charged particles associated with other interaction vertices are removed from further consideration.

Muons are reconstructed using the information collected in the muon detectors and the inner tracking detectors, and are measured in the range \(|\eta |< 2.4\). Tracks associated with muon candidates must be consistent with muons originating from the primary vertex, and are required to satisfy a set of identification requirements. Matching muon detector information to tracks measured in the silicon tracker results in a \(p_{\mathrm {T}}\) resolution for muons with \(20<p_{\mathrm {T}} < 100\,\text {Ge}\text {V} \) of 1.3–2.0% in the barrel and better than 6% in the endcaps. The \(p_{\mathrm {T}}\) resolution in the barrel is better than 10% for muons with \(p_{\mathrm {T}}\) up to 1\(\,\text {Te}\text {V}\)  [62].

Electron candidates are reconstructed in the range \(|\eta |<2.5\) by combining tracking information with energy deposits in the ECAL. Candidates are identified [63] using information on the spatial distribution of the shower, the track quality and the spatial match between the track and electromagnetic cluster, the fraction of total cluster energy in the HCAL, and the level of activity in the surrounding tracker and calorimeter regions. The transverse momentum \(p_{\mathrm {T}}\) resolution for electrons with \(p_{\mathrm {T}} \approx 45\,\text {Ge}\text {V} \) from \(\mathrm {Z} \rightarrow \mathrm {e}\mathrm {e}\) decays ranges from 1.7% for nonshowering electrons in the barrel region to 4.5% for electrons showering in the endcaps [63].

Jets are clustered using PF candidates as inputs to the anti-\(k_{\mathrm {T}}\) algorithm [60] in the FastJet  3.0 software package [61], using a distance parameter of 0.4. For all jets, corrections based on the jet area [64] are applied to the energy of the jets to remove the energy contributions from neutral hadrons from additional pp interactions in the same or adjacent bunch crossings (pileup collisions). Subsequent corrections are used to account for the nonlinear calorimetric response in both jet energy and mass, as a function of \(\eta \) and \(p_{\mathrm {T}} \) [65]. The jet energy resolution amounts typically to 15% at 10\(\,\text {Ge}\text {V}\), 8% at 100\(\,\text {Ge}\text {V}\), and 4% at 1\(\,\text {Te}\text {V}\)  [66]. Corrections to the jet energy scale and the jet energy resolution are propagated to the determination of the missing transverse momentum [66]. Jets associated with \(\mathrm {b}\) quarks are identified using the combined secondary vertex v2 algorithm [67, 68]. The working point used for jet \(\mathrm {b}\) tagging in this analysis has an efficiency of \(\approx \)65% (in \({\mathrm {t}\overline{\mathrm {t}}}\) simulated events) and a mistag rate (the rate at which light-flavor jets are incorrectly tagged) of approximately 1% [68].

Hadronically decaying \(\tau \) leptons are reconstructed with the hadron-plus-strips (HPS) algorithm [69] and are denoted by \(\tau _\mathrm {h} \). The HPS algorithm is based on PF jets and additionally includes photons originating from neutral pion decays. Energy depositions in the ECAL are reconstructed in “strips” elongated in the direction of the azimuthal angle \(\phi \), to take account of interactions in the material of the detector and the axial magnetic field. These deposits are associated with one or three charged tracks to reconstruct various hadronic decay modes of \(\tau \) leptons. To suppress backgrounds from light-quark or gluon jets, a \(\tau _\mathrm {h} \) candidate is required to be isolated from other energy deposits in the event. The isolation criterion is based on the scalar \(p_{\mathrm {T}} \) sum \(I_\tau \) of charged and neutral PF candidates within a cone of radius \(\smash [b]{\sqrt{(\varDelta \eta )^2 + (\varDelta \phi )^2} = 0.5}\) around the \(\tau _\mathrm {h} \) direction, excluding the \(\tau _\mathrm {h} \) candidate. The isolation criterion is \(I_\tau < 1.5\,\text {Ge}\text {V} \) [70].

The energies and resolutions as well as the selection efficiencies for all reconstructed jets and leptons are studied in data and simulated events [62, 63, 66, 68, 70]. Based on these studies, the simulation is corrected to match the data.

A kinematic reconstruction of the top quark candidate is performed by building top quark hypotheses using between one and five jets. Because of the presence of multiple hypotheses in each event, we choose the hypothesis in which the reconstructed top quark mass is closest to the value of 172.5\(\,\text {Ge}\text {V}\).

The statistical evaluation in this category is performed through a template-based fit to the measured \(p_{\mathrm {T}}^{\mathrm {t}} \) distribution.

In this category a counting experiment is performed, as the number of expected background events is too small for results to benefit from a shape-based analysis.

6.1 Backgrounds in category A

6.2 Backgrounds in category B

The results of all search categories in the electron and muon channels are combined in a binned-likelihood fit. A statistical template-based analysis, using the measured \(p_{\mathrm {T}}^{\mathrm {t}}\) distributions in category A and a counting experiment with the events measured in category B, is performed by using the Theta software package [82]. Each systematic uncertainty discussed in Sect. 7 is accounted for by a nuisance parameter in the likelihood formation.

In Table 3, the total number of events from background processes and signal processes in category B is summarized. No significant deviation from the SM prediction is observed in the data in either category A or category B.

A Bayesian statistical method [82, 83] is used to derive 95% confidence level (\(\text {CL}\)) upper limits on the product of the cross section and the branching fraction squared for \(\mathrm {LQ}_3 \) pair production. Pseudo-experiments are performed to extract expected limits under a background-only hypothesis. For the signal cross section parameter, we use a uniform prior distribution. For the nuisance parameters, log-normal prior distributions are used. These are randomly varied within their ranges of validity to estimate the 68 and 95% \(\text {CL}\) expected limits. Correlations between the systematic uncertainties across all channels are taken into account. The statistical uncertainties of simulated samples are treated as an additional Poisson nuisance parameter in each bin of the \(p_{\mathrm {T}}^{\mathrm {t}}\) distribution.

The 95% \(\text {CL}\) upper limits on the product of the cross section and the branching fraction squared \(\mathcal {B}^2\) as a function of \(\mathrm {LQ}_3\) mass and the 95% \(\text {CL}\) upper limits on the \(\mathrm {LQ}_3\) mass as a function of \(\mathcal {B}\) are shown in Fig. 6 (top). The cross section for pair production of scalar LQs at NLO accuracy [24] is shown as the dashed line. The dotted lines indicate the uncertainty due to the PDFs and to variations of the renormalization and factorization scales by factors of 0.5 and 2.

The results presented here can be directly reinterpreted in the context of pair produced down-type squarks decaying into top quark and \(\tau \) lepton pairs. Such squarks appear in RPV SUSY scenarios and correspond to LQs with \(\mathcal {B} = 0.5\). These squarks are excluded up to a mass of 810\(\,\text {Ge}\text {V}\), and the decay mode is dominated by the RPV coupling \(\lambda ^{\prime }_{333}\) [84].