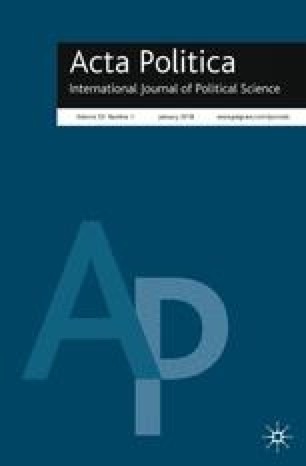 Electoral volatility in Belgium (2009–2014). Is there a difference between stable and volatile voters?

Increasing voter volatility has led to a renewed research interest in determinants of party switching. While previous research has mainly focused on the characteristics of volatile voters, less is known about how stable and volatile voters decide what party to vote for. Using panel data spanning two consecutive electoral cycles in Belgium, this study starts with the confirmation of earlier findings: we show that widely used determinants like political sophistication and disaffection add only modestly to our understanding of volatility. In a next step, we examine the vote choice process of stable and volatile voters. Our results indicate that in terms of determinants of the vote choice the two groups are somewhat different. In line with theoretical expectations about the effects of stronger voter volatility, we find that party-switchers are guided more by proximity evaluations. The implication of these results is that party-switchers might actually be enriching representative democracy. We close with some observations on how this finding qualifies our theoretical understanding of increasing levels of electoral volatility in liberal democracies.

Appendix A: Measurement and Coding of the Variables in the Analyses Explaining the Characteristics of Stable and Volatile Voters

Age: age of the respondent, calculated by subtracting the year of birth from the year in which the interview is conducted.

Religious practice: answer on the question how often the respondent participates in religious activities. Scale ranging from 0 (never) to 6 (once a week or more often).

Political trust: sum scale of questions probing trust in political parties; the regional government, the regional parliament, the federal government and politicians. For each institution, the respondent could indicate her/his trust on a scale ranging from 0 (no trust at all) to 10 (fully trust). The answers on these questions load on one factor ‘political trust’ (eigenvalue = 3.908; Cronbach’s Alpha = 0.94).

Political knowledge: sum scale of answers on five knowledge questions. For each question, the respondent was given four possible answers to choose from. These have been recoded to indicate a correct (1) or wrong or ‘don’t know’ (0) answer, and subsequently added up to construct one scale.

Political interest: answer on the question how interested the respondent is in politics in general. Respondents could indicate their interest on a scale ranging from 0 (not at all interested) to 10 (very much interested).

Descriptive statistics of variables in the logit analyses

Appendix B: Measurement and Coding of the Variables in the Analyses Explaining the Vote Choice Process of Stable and Volatile Voters

Distance to party: distance between the respondent’s self-placement on the ideological axis ranging from 0 (left) to 10 (right) and the party’s position on this axis. The parties’ positions were calculated by taking the average of the positions the respondents assigned to the different parties.

Leader evaluation: respondent’s evaluation of the leader of the parties, respectively, on a scale from 0 (no appreciation) to 10 (a lot appreciation).

Economic evaluation: respondent’s retrospective evaluation of the Belgian economic situation on a scale from −2 (strongly decreased) to 2 (strongly increased).

*In total, 28.99% of the stable voters indicated to identify with a political party.

*In total, 53.14% of the volatile voters indicated to identify with a political party.

Average marginal effects of the models displayed in Table 1

Appendix E: Analyses of the vote choice process for the Belgian regions separately

Note: Average marginal effects and 90% confidence intervals for stable volatile voters, respectively. Estimates are based on estimates of Stable and Volatile, respectively, in the regions separately (Table E.1.). Data: BEP, 2009–2014.

In order to provide a solution for panel attrition in the data, we calculated attrition weights. The method that we used is ‘Inverse Probability Treatment Weighting (IPTW) Using the Propensity Score – the same method that has been used to weigh the GLES data (Blumenstiel and Gummer, 2013). This method creates a weighting variable in which the representativeness of the panel respondents is ensured (Austin, 2011). Panel data are particularly suited for the IPTW method since by definition in the first wave of the study all respondents (so also future non-respondents) took part and completed the questionnaire. In contrast to what holds for cross-sectional studies, thus, there are data available on the characteristics of non-respondents from the second wave on (Rizzo, Kalton and Brick, 1994). This information of the first wave makes it possible to calculate weights specifically created to correct for panel attrition (Vandecasteele and Debels, 2007).

The rationale behind IPTW is the following. In a first step, the determinants of dropout are searched for. Subsequently, based on this knowledge, the probability for each respondent to participate in the next wave is calculated. The attributed weight, then, is the inverse of this probability. By taking into account the appropriate determinants, this inverse of the probability of participating thus ensures that those respondents who have the profile of respondents of whom we would expect to drop out but actually do participate receive a higher weight than those of whom it could be expected that they would continue participation. Thus, in this way, the results are corrected to the factors driving dropout/participation, and ensure a more equal representation.

A logistic model predicting the probability of participation in the later waves including these variables is thus estimated, and every respondent is then assigned the weight that corresponds with the inverse of this probability. In Table F.1, we display the results of the model explaining participation in the fifth wave, on the basis of which we calculated the attrition weight used to weigh the analyses in this paper.
Table F.1

Note: Entries are log-odds coefficients, and standard errors are reported between parentheses. Data: BEP, 2009–2014. Data are weighted by socio-demographics and to correct for attrition in the panel. Significance levels: ** p < 0.01; *** p < 0.001.

Note: Average marginal effects and 90% confidence intervals for stable volatile voters, respectively. Estimates are based on estimates of Stable and Volatile, respectively, in the analyses with only the party of the Minister-President as ‘party in government’ (Table G.1). Data: BEP, 2009–2014.