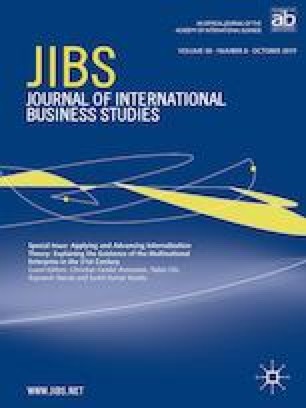 We extend the internalization literature by theorizing on how public disclosure of corporate social irresponsibility (CSI) can damage reputation-based firm-specific advantages of multinational companies (MNCs) and how foreign subsidiary governance can subsequently be used as strategic responses. Specifically, we distinguish between two foreign subsidiary governance mechanisms – information control and ownership control – that the prior literature has often assumed operate in parallel, and posit that they function in divergent directions in this context. Furthermore, we explain how two host-country characteristics – press freedom and regulatory quality – amplify the need for MNCs to utilize different governance mechanisms as responses to CSI disclosure.

We are thankful to the Editor Rajneesh Narula, three anonymous reviewers, and participants in the Paper Development Workshop of the AIB 2018 annual conference, particularly Guest Editors Christian Geisler Asmussen, Tailan Chi, and Sumit Kundu, for their respective helpful comments and conversations.

Accepted by Christian Geisler Asmussen, Tailan Chi, and Rajneesh Narula, Special Issue Guest Editors, 12 January 2019. This article has been with the authors for four revisions.

Appendix A: Operationalization of Severity and Reach of CSI by RepRisk

RepRisk evaluates the degree of severity of CSI by examining (1) the direct consequences of the incidence (e.g., whether it has resulted in major injuries, deaths or property damage), (2) the horizontal extent of the incidence (e.g., whether it affects a small number or a large number of stakeholders), and (3) the cause of the incident (i.e., whether it is caused by accident, negligence, intent, or even systematically). The degrees of high, medium, and low are judged by the analyst panel. We use the CSI incidents of General Electric (GE) as an example to show the three levels of severity.

RepRisk codes the degree of reach of CSI by examining the media influence based on the readership level. If a particular CSI incident appears in multiple levels, the reach score is from the highest level.

Specifically, the level of reach is defined as follows: