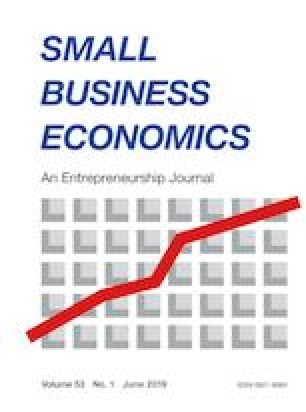 Prediction based on entrepreneurship-prone personality profiles: sometimes worse than the toss of a coin

The human personality predicts a wide range of activities and occupational choices—from musical sophistication to entrepreneurial careers. However, which method should be applied if information on personality traits is used for prediction and advice? In psychological research, group profiles are widely employed. In this contribution, we examine the performance of profiles using the example of career prediction and advice, involving a comparison of average trait scores of successful entrepreneurs with the traits of potential entrepreneurs. Based on a simple theoretical model estimated with GSOEP data and analyzed with Monte Carlo methods, we show, for the first time, that the choice of the comparison method matters substantially. We reveal that under certain conditions the performance of average profiles is inferior to the tossing of a coin. Alternative methods, such as directly estimating success probabilities, deliver better performance and are more robust.

We are indebted two anonymous referees as well as to the participants of the Entrepreneurship Residence Week, in particular to Moren Levesque, Simon Parker, and Mirjam van Praag for their helpful comments.

Appendix A: Proof of consistency

To establish consistency with the profile-based approach, we must essentially answer the following question: What happens to the distribution of the individual trait if we condition on entrepreneurial abilities? Let μΓ|E denote the mean of Γ for entrepreneurs and let \(\mu _{\Gamma |E^{\textsf {c}}}\) denote the mean of the personality trait for non-entrepreneurs. Similarly, denote the variance of personality trait, Γ, by \(\sigma _{\Gamma |E}^{2}\), respectively \(\sigma _{\Gamma |E^{\mathsf {c}}}^{2}\). It is straightforward to derive that

A personality- or profile-oriented approach has the following strategy. It takes the client’s personality trait, γ, and compares it to the typical trait, μΓ|E, of an entrepreneur. If Γ and π are sufficiently correlated, the Γ-values of entrepreneurs will be concentrated in one place and Γ-values of non-entrepreneurs in another. Hence, similarity between the client’s γ and profile μΓ|E is an indication that the client is an entrepreneur. If the correlation is weak, all Γ-values will be located in roughly one place independent from π such that similarity between the client’s trait, γ, and profile μΓ|E has little meaning.

To show consistency with the variable-oriented approach, let \({\Psi }\in \mathbb {R}\) denote a normally distributed variable with mean μΨ and variance \(\sigma _{\Psi }^{2}\). Ψ is assumed to capture all factors affecting entrepreneurial abilities that are not related to the personality trait, represented by Γ, such that we can assume that Ψ and personality trait, Γ, are independent. The variable-oriented approach is consistent with the following model of entrepreneurial abilities:

$$ {\Pi}=a{\Gamma}+b{\Psi} $$
(A.4)
where a and b are nonzero constant scalars. For instance, let Γ represent extraversion (one of the Big Five personality traits). If a > 0, more extraversion will increase entrepreneurial abilities, which is in line with previous research (Costa et al. 1984; Zhao and Seibert 2006; Zhao et al. 2010). The difference between the variable-oriented perspective and entrepreneurship-prone profiles is that in the model in Eq. A.4 there is no specific reference profile of an entrepreneur. The assumption underlying Eq. A.4 is that, given a > 0, the trait Γ simply positively relates to entrepreneurial abilities, i.e., a higher score in Γ is associated with higher abilities. The model in Eq. A.4 generates a joint distribution of personality trait and abilities that is consistent with our recommendation model. Notice that π in Eq. A.4 is normal (it is the sum of two normal independent variables) with the following parameters:
$$\mu_{\Pi}=a\mu_{\Gamma}+b\mu_{\Psi},\qquad\sigma_{\Pi}^{2}=a^{2}+b^{2}\sigma_{\Psi}^{2} $$
The covariance between π and personality trait Γ is given by
$$\sigma({\Pi},{\Gamma})=a(1 + 2\mu_{\Gamma}^{2})+ 2b\mu_{\Psi}\mu_{\Gamma} $$
Furthermore, it can be demonstrated that π and Γ are jointly normal according to the model in Eq. A.4. The joint distribution of π in model (A.4) and personality trait Γ is bivariate normal if and only if Y = απ + βΓ is normal for any constant \(\alpha ,\beta \in \mathbb {R}\). It is obvious that Y is normal if either α = 0 or β = 0, as π and Γ are both normal. If α = β = 0, Y = 0 with probability 1, which corresponds to a normal distribution with mean and variance zero. Hence, we must demonstrate that Y is normal if α and β are both nonzero. Note that π and Γ are dependent and correlated. Furthermore, note that
$$ Y=\alpha{\Pi}+\beta{\Gamma}=\alpha(a{\Gamma}+b{\Psi})+\beta{\Gamma}=\delta_{\Gamma}{\Gamma}+\delta_{\Psi}{\Psi} $$
(A.5)

where δΓ ≡ αa + β and δΨ ≡ αb. Using independence and normality of Γ and π, the moment-generating function of Y is given by

To check the robustness of the results obtained with GSOEP data, this appendix provides additional simulation results using 1,620 combinations of parameter values.

Let l = 1,…,L denote all parameter combinations. Let Sl denote the recommendation performance of an arbitrary approach given parameter combination l. We consider L = 1, 620 combinations. As before, for every parameter combination, we compute 10,000 simulations with sample sizes n(Θ) = 1, 000 and n(Ω) = 100. Given a sample of historical and client data, we apply three approaches to the same simulated data:
Parameters, which are given in Table 3, are selected in a way such that a high number of different conditions is covered. Correlation between personality trait and entrepreneurial abilities ranges from weak, ρ = 0.1, to strong, ρ = 0.9.
Table 3

To compute 𝜖∗ for the optimized version of average scores, we numerically maximize Eq. 6 for every parameter combination. Given the assumption on μπ and τ, we cover a wide range of population shares of entrepreneurs, which is demonstrated in Fig. 3.

To get an overview over average performance, we compute the simulation average, approximating \(\mathbb {E}[\mathcal {S}^{l}]\), for every parameter combination l and every approach.

In Fig. 4, we plot the distribution of average recommendation. Figure 4 reveals that the general average-scores approach (GAS) substantially underperforms compared to all other approaches.
In Fig. 5, we only show distributions of average success rates for a high correlation between personality trait and entrepreneurial abilities (ρ = 0.9). Still, even when correlation between personality trait and entrepreneurial abilities is high, general average scores underperform in comparison to all other approaches.

In contrast to general average scores, optimized average scores (OAS) exhibit high average success rates, which are slightly inferior to the upper boundary of recommendation performance represented by the probability-based approach (PBA). The results on relative performance are consistent with those obtained with the GSOEP calibrated model.

To test the first requirement, in Fig. 6, we plot average recommendation success rates of (a) the optimized average-scores approach and (b) the general average-scores approach as a function of the parameter combinations index, l. Optimized average scores (Fig. 6a) always fulfill the first requirement. In case of general average scores (Fig. 6b), average success rates are smaller than 50%, the approach is inferior to the coin, in about 44% of all parameter combinations. More specific, only if the population share of entrepreneurs is low (about 19% on average, ranging between about 2% and 50%), general average scores outperform the coin with respect to average recommendation success rates.
To test the second requirement, let \(l_{\varepsilon ,\varepsilon ^{\prime }}=(l_{\varepsilon },l_{\varepsilon ^{\prime }})\) denote a pair of parameter combination where all parameters besides the similarity criterion are exactly the same. Our simulation-based measure of robustness, the simulation counterpart of Δ(ε,ε′), is
$$\hat{\Delta}(l_{\varepsilon,\varepsilon^{\prime}})=\frac{1}{M}\left|\sum\limits_{m = 1}^{M}\mathcal{S}_{m}^{l_{\varepsilon}}-\sum\limits_{m = 1}^{M}\mathcal{S}_{m}^{l_{\varepsilon^{\prime}}}\right| $$
In Fig. 7, we present robustness measures for average scores. Changing from a strict (𝜖 = 0.01) to a tolerant (𝜖 = 0.15) similarity criterion, or vice versa, changes average recommendation success rates by about 11 percentage points at maximum. The results become more striking when we compare the strict and the tolerant criterion to the optimized similarity criterion 𝜖∗. The difference in average success rates between the strict and the optimized criterion is 95 percentage points at maximum, while the success rate difference between the tolerant and the optimized criterion is approx. 84 percentage points at maximum. The results indicate that average scores are not robust—mistakes of the adviser can generate high costs (e.g., a loss in average recommendation success rates of 95 percentage points).