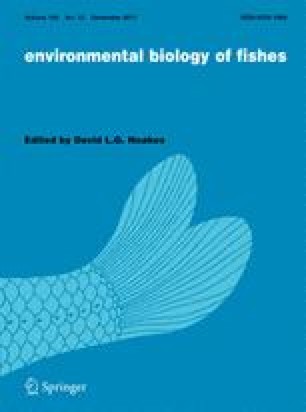 Migratory species take advantage of multiple habitats during their life cycle to optimize growth, survival, and reproduction. However, migration also makes them vulnerable to habitat degradation and exploitation in each habitat, and loss of connection between habitats. Partially migratory species (i.e., migration is facultative rather than obligate) can persist after loss of connectivity and may then resume migration after the habitats are reconnected. We analyzed stable isotopes of carbon and nitrogen to investigate the possible use of marine habitats for foraging by bull trout, Salvelinus confluentus, in years immediately after removal of impassable hydroelectric dams on the Elwha River, Washington State, USA. Juveniles in the Elwha River estuary were similar in δ15N and δ13C values to those in the estuary of the free-flowing Dungeness River nearby, and the values of fish from the estuaries were higher than those of juveniles collected in the river, consistent with use of marine food sources. Adult bull trout collected in each of the rivers had values indicating extensive reliance on marine prey - similar to those of adult Pacific salmon that had spent several years at sea. Taken together, these data demonstrate that the Elwha River bull trout, almost entirely landlocked for a century, are rapidly resuming anadromy and that the marine prey contribute substantially to their trophic ecology and likely their growth. More broadly, the results reveal the importance of connectivity for migratory fishes, their ability to resume anadromy once the connection between habitats is restored, and the population resilience that partial migration provides for them.

Many individuals assisted with the sampling but we especially thank Matt Beirne for help in the Elwha River estuary, and Randy Cooper, Larry Ogg, and Nikki Sather for sampling in the Dungeness River. For the Elwha River sampling, we especially thank Patrick Connolly, Anna Geffre, Josh Geffre, Heidi Hugunin, Phil Kennedy, Michaela Lowe, Kaylee Moser, Raymond Moses, Michelle Pena-Ortiz, James Starr, Todd Bennett, Keith Denton, Steve Corbett, Brieuc Couillerot, Kinsey Frick, Mike McHenry, and Dan Spencer. Austin Anderson prepared the samples for processing, which was conducted at the University of Washington’s IsoLab. Sampling in the Elwha River estuary was supported by the U.S. Environmental Protection Agency–Puget Sound Partnership Puget Sound Protection and Restoration Tribal Assistance Program (CFDA#66.121), and by the Olympic National Park, U.S. Fish and Wildlife Service, and Lower Elwha Klallam Tribe. Sample processing and analysis was supported by the Washington Sea Grant program, University of Washington, pursuant to NOAA Award No. NA10OAR4170075, Project R/LME-7, and the H. Mason Keeler and the Richard and Lois Worthington endowments at the University of Washington. Helpful comments on a draft were provided by George Pess, Jeffrey Duda, Patrick Crain, and four anonymous reviewers. The findings and conclusions in this article are those of the authors and do not necessarily represent the views of the U.S. Fish and Wildlife Service.