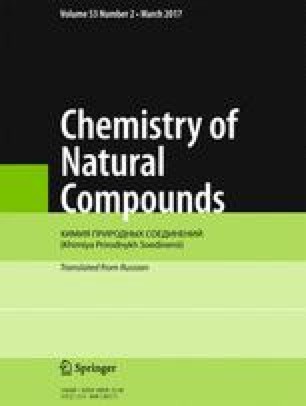 Chemical Constituents of the Whole Plants of Houttuynia cordata

Houttuynia cordata is a member of the Houttuynia genus, which is mainly distributed in the provinces to the south of the Yangtze River in China [1]. Modern pharmacological research on H. cordata has shown that it has multiple biological activities, such as antiviral, anti-inflammatory, antibacterial, immunomodulatory, antiradiation, and antidiuretic effects [2, 3, 4, 5, 6, 7].

Twenty-seven compounds were isolated and identified by MS and 1D and 2D NMR spectroscopic analyses. Among them, eight compounds (1–8) were isolated from this plant for the first time. In addition, the in vitro antiviral activities of the isolates against respiratory syncytial virus (RSV) were evaluated.

The whole plants of Houttuynia cordataThunb. were provided by Shijiazhuang Yiling Pharmaceutical Co. and authenticated by Dr. Chun-Hua Wang, Tianjin University of Traditional Chinese Medicine. A voucher specimen (No. 20120004CH) was deposited in the Research and Development Center of Traditional Chinese...

Respiratory Syncytial Virus Genistein Luteolin Lauric Acid Hyperin
These keywords were added by machine and not by the authors. This process is experimental and the keywords may be updated as the learning algorithm improves.