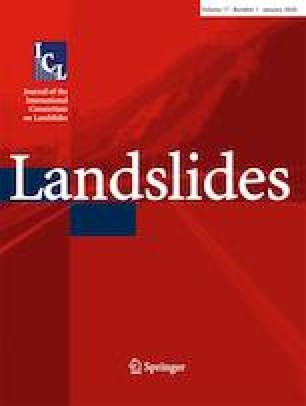 Leonardo da Vinci (1452–1519 CE) was one of the most productive geniuses in history. He was painter, draftsman, sculptor, architect, and engineer whose genius, perhaps more than that of any other figure, epitomized the Renaissance humanist ideal. He also studied rocks and landscapes to improve the realism of his paintings, as well as to increase his knowledge about the surface earth geohazards, in terms of heavy rainfall, floods, and even landslides. The relationship between Leonardo and landslides was never investigated before. For the first time, the present article investigates a drawing by Leonardo da Vinci, dating back to 1482–1485, in which he set up a precise description of a rock slump/fall, with its crown, upper scarp, surface of rupture, and debris deposit. This is remarkable as it contributes to expand the scientific dimension of Leonardo, and also calls to a proper consideration about geomorphological hazards inside his studies. This relationship is confirmed by a second drawing by Leonardo, ca. 1512–1518, in which he drew a rock fall at the very moment of collapse, while impacting on two rupestrian settlements. The present article, re-interpreting some material produced by one of the fathers of modern science, is also a tribute of the journal “Landslide” to Leonardo da Vinci, on the occasion of the 500th anniversary of his passing away.

The author gratefully acknowledges Peter Bobrowsky and Nicola Casagli for their valuable advises and support.

The author declares that he has no conflict of interest.