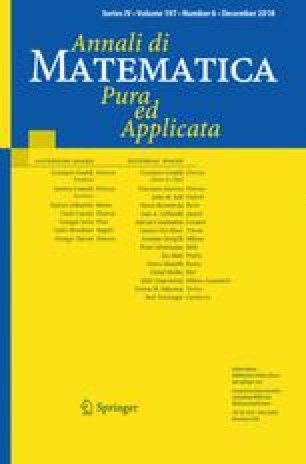 1 Introduction and setting of the problem

Epidemiology is the study of the spread of diseases with the objective of tracing factors that are responsible for or contribute to their occurrence. Mathematical models are used extensively in the study of epidemiological phenomena. Most models for the transmission of infectious diseases (see, for instance, Anderson and May [1], Brauer et al. [4]) descend from the classical SIR model of Kermack and McKendrick [8] established in 1927. Its classical form involves a system of autonomous ordinary differential equations for three classes, the susceptible S, infective I and recovered R, of a constant total population.

There is a strong biological motivation to include time-dependent terms into epidemiological models; for instance, temporally varying forcing is typical of seasonal variation of a disease (see Keeling et al. [7], Stone et al. [10]).

We consider the following model (1)–(3) below, a classical and well-known model from mathematical epidemiology in the form of the SIR equations, with diffusion, in which a temporal forcing term is considered.

Several approaches have been used for this model, like the theory of non-autonomous dynamical systems. Some questions addressed concerning this model are the existence of solution or the existence of a pullback attractor, i.e., a family of time-dependent compact sets which is invariant and pullback attracts autonomous bounded sets. An important matter is why the attractor has to be unique. It is obvious that the attractor is minimal with respect to set inclusion, and that is the only way to talk about uniqueness when dealing with a universe of autonomous bounded sets, since the attractor is not an object of the universe and cannot be attracted by itself.

In this sense, in Anguiano and Kloeden [2] we prove the existence and uniqueness of positive solutions of (1)–(3) for initial data in \(L^2\), and we establish that if the non-autonomous term takes positive bounded values, the process associated with (1)–(3) has a unique pullback attractor \(\mathcal {A}\).

Another question is the study of regularity for this model. For instance, in Anguiano [3] we establish a regularity result for the unique positive solution to problem (1)–(3), and we prove some regularity results for the pullback attractor \(\mathcal {A}\) obtained in [2]. This study motivated the investigation of the problem considered in this paper. Moreover, as far as we know, there are no results in the literature concerning the uniform boundedness of the pullback attractor \(\mathcal {A}\) as we will consider in the present paper.

We recall a lemma (see Robinson [9] for more details) which is necessary for the proof of our results.

The aim of this section is to continue with the analysis of the model in the sense of proving that the attractor \( \mathcal {A}(t)\) is uniformly bounded in the space \(H^2(\varOmega )^3\), provided some additional assumptions are fulfilled. Our second main result is the following.

In Anguiano and Kloeden [2], we prove that the process associated with this model has a unique pullback attractor \(\mathcal {A}=\{A(t):t\in \mathbb {R}\}\) in \(L^2\), which is obtained by pullback convergence that makes use of information about the past of the non-autonomous dynamical system. It includes and is perhaps most realistic, when the non-autonomity arises from asymptotic autonomity or some sort of temporal recurrence such as periodicity or almost periodicity.