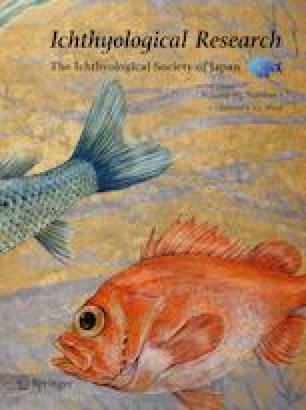 A new perchlet, Plectranthias ryukyuensis, is described on the basis of four specimens (41.2–61.6 mm standard length: SL) from the Okinawa Islands, Japan. Plectranthias ryukyuensis can be distinguished from all congeners by the following combination of characters: X, 15 or 16 dorsal-fin rays; 14 pectoral-fin rays, all unbranched; lateral line complete, with 29 or 30 pored scales; 3 scale rows above lateral line; 5 or 6 diagonal rows of large scales on cheek between eye and corner of preopercle; preopercle with two antrorse spines on ventral margin, 20–29 serrae on posterior margin; margins of subopercle and interopercle with a few serrae (weak in large individuals); minute flaps at tips of first to ninth dorsal-fin spines; caudal fin shallowly emarginate, with some ray branches distinctively elongated past fin margin; fourth dorsal-fin spine longest, its length 110.6–128.6% that of third spine; body pinkish-white with two longitudinal rows of irregular orange-red blotches on upper half of lateral surface when fresh (rows close together in smaller than ca. 50 mm SL), blotches interconnecting anteriorly on upper and lower rows, and posterior half of lower row; four faint orange-red vertical bands below lateral line on posterior half of body and two distinct yellow blotches on cheek in fresh specimens; body uniformly yellowish-brown with two longitudinal rows of irregular dark blotches on upper half of lateral surface in preserved specimens (faint in small specimens). A key to the Japanese species of Plectranthias is given.

This article was registered in the Official Registry of Zoological Nomenclature (ZooBank) as 3AF9754A-110D-4DEA-9AAE-6F3786122C1A.

This article was published as an Online First article on the online publication date shown on this page. The article should be cited by using the doi number.

© The Ichthyological Society of Japan 2020