The European Physical Journal B - Condensed Matter and Complex Systems 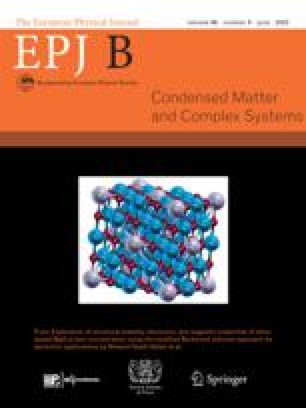 The European Physical Journal B - Condensed Matter and Complex Systems

Phospholipid membrane forming a closed surface and decorated with anisotropic inclusions is considered. The inclusions are free to redistribute laterally over the membrane and to orient in the plane of the membrane according to the local membrane curvature. A phenomenological expression for the energy of the interaction between an inclusion and local curvature of the surrounding membrane is proposed. Considering this single-inclusion energy, and assuming thermodynamic equilibrium, the free energy of the inclusions, and the consistently related lateral and orientational distributions of the inclusions are obtained using statistical mechanical methods. For a vesicle shape with given surface area, enclosed volume, and total amount of inclusions, the free energy is in general given in a nonlocal form (i.e. it can not be expressed as an integral of its area density over the membrane area). The limits of weak and strong orientational ordering are considered. Specifically, it is shown that in the shape sequence representing the formation of an exovesicle the effect of the membrane curvature on the orientation of the inclusions may stabilize the shape where the exovesicle and the cell are connected by a narrow neck.