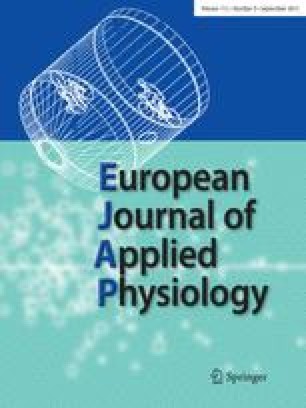 In a double-blind, placebo, controlled study, we investigated the acute effects of short-term oral creatine supplementation (20 g · day−1 for 6 days) on muscle activation, fatigue and recovery of the m. quadriceps femoris during electrical stimulation, and on maximal performance during sprint cycling. The quadriceps muscles of 23 well-trained rowers were stimulated at different frequencies (10, 20, 50, 100, 150 and 200 Hz). Furthermore, 40 repetitive, electrically stimulated (duration 220 ms, stimulation frequency 150 Hz) concentric contractions were imposed at a constant angular velocity of 180° · s−1 over a range of 50° (from 90 to 140° knee angle), each extension/flexion cycle lasting 1200 ms. To determine recovery, torque was measured at 20, 50, 80, 120, 180 and 300 s after the last contraction. In addition, two maximal 30-s sprints were performed on a cycle ergometer with 4 min rest in between. Following short-term creatine supplementation, body mass [mean (SEM)] increased (P < 0.05) from 85.7 (2.7) kg to 87.3 (2.9) kg. Creatine supplementation had no effect on maximal voluntary isometric torque and muscle activation, or on fatigue and recovery of dynamic exercise. There was also no significant effect on peak power, time to peak power and work to peak power, or total work during both sprints on the cycle ergometer. It was concluded that short-term oral creatine supplementation resulted in increased body mass, but did not enhance muscle performance or maximal output during sprint cycling.