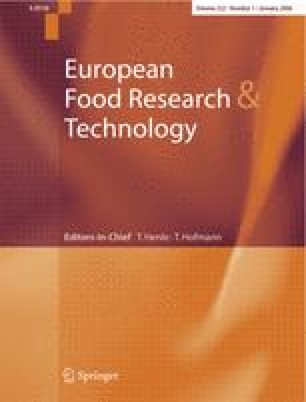 Kidney beans (Phaseolus vulgaris) were being processed for inclusion into a weaning food formulation. They were sprouted for 96 h at 30  °C and some nutrients and antinutrients were evaluated every 12 h. During the entire sprouting period, starch content decreased by 55.6%. This was accompanied by an increase in reducing and non-reducing sugars from 0.19 to 9.46 and 1.87 to 4.16 g/100 g dry matter (DM) respectively. These carbohydrate changes were due to an increase in amylolytic activity, as evidenced by a more than fivefold increase in diastatic activity. Tannins decreased to undetectable levels, and trypsin inhibitor substances and phytates decreased by 70.7% and 85.9% during the entire sprouting period. In vitro protein digestibility, which is negatively affected by these antinutrients, increased by 17.1% during the same period. HCl extractability of Ca, Fe and Zn increased by 55.2%, 54.7% and 53.0%, respectively.