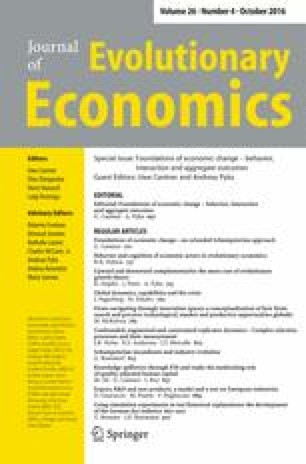 Knowledge spillovers through FDI and trade: the moderating role of quality-adjusted human capital

Authors gratefully acknowledge the financial support from DFG RTG 1411 “The Economics of Innovative Change”. Authors are also thankful to the comments and suggestions from the participants of 15th International Joseph A. Schumpeter Society Conference in Jena and 7th Jena Summer Academy. Thanks is also due to Dr. Charles McCann for proofreading. The usual disclaimers apply.

Advantages and disadvantages of different proxies for quality of human capital

Data in macroeconomics generally possess a strong deterministic trend, especially when there is a sufficiently long time series. The variables in such cases are generally non-stationary (that is, they do not have a constant mean and variance over time). In time series, when variables are non-stationary, conventional estimation techniques, such as ordinary least squares, are expected to be driven by spurious correlation (Phillips 1986). Engle and Granger (1987) show that linear combination of two or more \( I(1) \) (non-stationary) variables could be \( I(0) \) (stationary) in which case the series are said to be cointegrated. In other words, non-stationary variables are said to be cointegrated if the residuals from their relationship are stationary. By using cointegration, one can use full information embodied in the variables and also use the attractive properties of cointegration techniques such as super consistency when n goes to infinity (Stock 1987). Estimates generated by ordinary least squares, however, do not follow an asymptotic Gaussian distribution, therefore standard testing procedures are invalid unless they are significantly modified. Fully Modified OLS (FMOLS) and Dynamic OLS (DOLS) are generally considered as an alternative to simple OLS in the presence of cointegration. Since our data contain relatively large macroeconomic time series of 16 years, we test our variables for unit root, the presence of which motivates the test for cointegration.