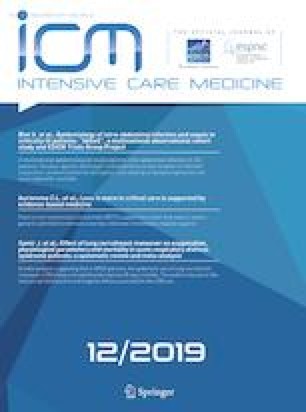 Less is more in Intensive Care

The notion that “less is (or may be) more” in intensive care medicine has been contemplated by experts for decades. However, not until Kox and Pickkers’ review in 2013 had there been careful consideration of the evidence supporting this theory [1]. Their thought-provoking article focused specifically on sepsis, but the intervening years have yielded expanded evidence supporting this notion across many critical conditions. As healthcare systems seek to incentivize high-value care, transparency, and adherence to evidence-based practice guidelines, we must assess the strength of the evidence base regarding less is more. Here, we discuss recent randomized clinical trials (RCTs) that support the notion that even in intensive care units (ICUs), less intensive interventions may prove superior.

Perhaps the biggest giant to fall in the last six years is early-goal-directed therapy (EGDT) for sepsis care—or at least the variety of EGDT proposed by Rivers and colleagues [2]. Three separate RCTs conducted across seven countries have shown no mortality benefit to protocolized EGDT when compared to protocol-based standard therapy or usual care [3, 4, 5]. In all studies, patients in the EGDT group received increased days of vasopressor support. Mouncey et al. additionally found that EGDT was associated with increased ICU length of stay (LOS) and costs [4]. While these studies have not debunked the value of early antibiotics and resuscitation, they have been practice-changing around the more invasive components of the original EGDT protocol, specifically the routine use of central venous catheters and using central venous saturations to guide blood transfusion.

A paradigmatic example of a less-is-more strategy is the use of low tidal volume ventilation. In the two decades following the landmark ARMA trial [7], additional evidence supports simplified versions of low tidal volume strategies for patients with ARDS over more complex and aggressive strategies. The addition of lung recruitment maneuvers and PEEP titration increased mortality when compared to low-PEEP strategy in patients with moderate to severe ARDS [8]. The aggressive ventilator strategy also decreased mean ventilator-free days (VFDs) and increased risk of pneumothorax and barotrauma.

Several RCTs have also compared the administration of colloid with crystalloid solutions. In patients with severe sepsis, fluid resuscitation with hydroxyethyl starch (HES) was compared to Ringer’s acetate. The trial found an increased risk of death and renal-replacement therapy (RRT) in patients randomized to the HES group [9]. In a second trial, resuscitation with HES was compared to normal saline solution in a mixed ICU population [10]. While mortality did not differ across arms, again, increased rates of RRT were noted in the HES group.

Another key example of a less-is-more approach is the guidance, since the original TRICC trial, to use a restrictive rather than liberal threshold for transfusing red blood cells [11]. Recent evidence solidified the less-is-more approach regarding transfusion in populations initially excluded from early trials [11, 12]. An RCT of patients with severe acute upper gastrointestinal bleeding revealed improved survival, reduced bleeding, and fewer adverse events with a restrictive transfusion approach [13]. Another RCT among patients undergoing cardiac surgery revealed the restrictive approach was generally no worse than the liberal approach despite significantly reduced transfusions, and was superior to the liberal approach among older patients [14].

Gaudry et al. completed a multicenter RCT of patients with severe acute kidney injury without emergent indications for dialysis to receiving renal replacement therapy (RRT) either early (immediately after randomization) or delayed (only if and when a severe complication of renal failure developed) [15]. While there was no difference in mortality between groups, the delayed strategy enabled the avoidance of RRT in 61% of survivors.

Caloric intake seems like an area in which more should simply be more given the adverse consequences of malnutrition among the critically ill. Yet again, more aggressive strategies have not proven beneficial. Delaying initiation of parenteral nutrition to supplement caloric intake of both adult and pediatric patients not meeting their goals enterally was associated with many benefits including shorter LOS, fewer ICU infections, and decreased cost of care [17, 18]. In a trial of energy-dense vs routine enteral nutrition in mechanically ventilated patients, the more intense strategy did not show a mortality benefit, but did result in more gastrointestinal intolerance and hyperglycemia [19]. These results were similar to those seen in an earlier RCT comparing trophic enteral feeding with full dose feeding [20].

Together, these RCTs support the notion that less intensive management is often superior to more intensive approaches to critical care delivery. Though many of the trials were null with regard to mortality, most ICU trials lack adequate statistical power to identify plausible mortality differences [21]. Importantly, as designed, the trials above frequently demonstrate that secondary outcomes favor the less intensive approach and establish real harm associated with more intensive interventions. Statistical power is not the only limitation in many of these trials (Table 1). Development of a more personalized approach, or the design of trials with better predictive and prognostic enrichment may allow for a more nuanced understanding of when and for whom “more is more” [22, 23]. However, with currently available evidence, the uniform absence of benefits to more intensive approaches itself favors a less intensive approach—why would one use more costly strategies when less costly ones are at least as good?
Table 1