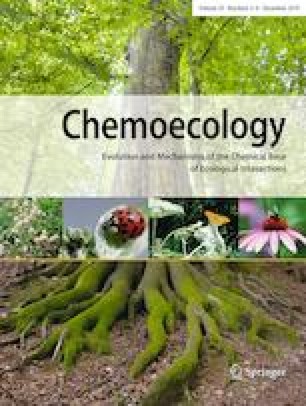 Geographically separated orange and blue populations of the Amazonian poison frog Adelphobates galactonotus (Anura, Dendrobatidae) do not differ in alkaloid composition or palatability

As is typical of chemically defended animals, poison frogs present high variability in their alkaloid-based defenses. Previous studies have shown that geographically separated color morphs of Oophaga and Dendrobates species differ in both alkaloid composition and arthropod palatability. Here, we tested the generality of that finding by studying the alkaloid composition and palatability of geographically separated blue and orange morphs of the splash-backed poison frog, Adelphobates galactonotus. We identified and quantified the alkaloid composition of each individual frog using gas chromatography–mass spectrometry and evaluated the palatability of individual secretions to arthropods conducting feeding trials with Drosophila melanogaster. Despite their conspicuous differences in color and separation on opposite sides of a large aquatic barrier, the two morphs did not differ in alkaloid composition or palatability. This result shows that both color morphs are equally chemically protected and suggests that the color variation is not driven by predator selection.