Journal of Statistical Theory and Practice 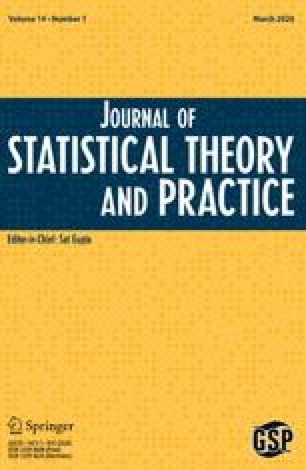 Journal of Statistical Theory and Practice

We consider nonregular fractions of factorial experiments for a class of linear models. These models have a common general mean and main effects; however, they may have different 2-factor interactions. Here we assume for simplicity that 3-factor and higher-order interactions are negligible. In the absence of a priori knowledge about which interactions are important, it is reasonable to prefer a design that results in equal variance for the estimates of all interaction effects to aid in model discrimination. Such designs are called common variance designs and can be quite challenging to identify without performing an exhaustive search of possible designs. In this work, we introduce an extension of common variance designs called approximate common variance or A-ComVar designs. We develop a numerical approach to finding A-ComVar designs that is much more efficient than an exhaustive search. We present the types of A-ComVar designs that can be found for different number of factors, runs, and interactions. We further demonstrate the competitive performance of both common variance and A-ComVar designs using several comparisons to other popular designs in the literature.

In this work we used a genetic algorithm to find designs that maximize the A-ComVar objective function. This appendix provides specific details on the algorithm. Keeping with the standard genetic algorithm terminology, we use the word chromosome to describe a single candidate design. Each chromosome is comprised of the factor settings for each factor at each design point. Each of these individual factor settings is known as a gene. The population is the set of all chromosomes, i.e., all designs that we are currently considering.

We illustrate a simple version of the genetic algorithm below. In this example we search for a 6-run A-ComVar design for an experiment with three two-level factors and one interaction. We label the factors as A, B, and C. For simplicity, we assume that the population size is 3, although in real applications it will generally be larger.

Since this experiment has three two-level factors, there are 8 possible design points to pick the 6 points for our design from. The 8 points are shown in Table 7. There are \({3}\atopwithdelims (){2}\) \(= 3\) possible models with all main effects and one interaction. For notational simplicity we label these models by the corresponding interaction: (AB), (AC), and (BC). Our goal is to obtain a design under which the variance of the interaction term is identical, or close to identical, under all three of these models.
Table 7

Now that we have completed the initialization process, we can begin the main loop over the algorithm.

Note that it is possible to consider other ways of producing offspring via crossover. For example, the cut point could be different for each support point, or they could be “horizontal” instead of “vertical,” choosing certain rows from the first chromosome and the remaining rows from the second.

In addition to crossover, more novelty can be introduced to the solution by randomly changing, or mutating, some of factor settings. For our purpose, the probability of each factor setting (gene) mutating is identical.

Following Steps 3 and 4, we are now ready to replace the old chromosome with the offspring. In this step, the worst chromosome(s) is replaced by the offspring created in Steps 2–3. The fitness of this new chromosome is evaluated and stored.