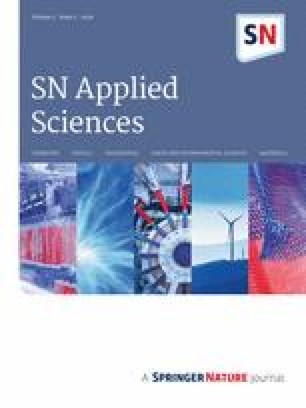 It is an underlying fact for the case of the joining process especially welding to have optimized parameters in order to achieve joints with outstanding mechanical characteristics. In the current work, aluminium 6061 pipes were welded using gas metal arc welding process with appropriate ER 4043 electrode and argon shielding gas. Optimum welding parameters (namely, current, voltage and travel speed) are investigated using analysis of variance ANOVA and grey relational analysis GRA statistical approaches. High tensile strength and low corrosion rate were set as required characteristics of quality welds. Since there are two responses and two objectives, multiple-criteria decision-making approach—GRA, and ANOVA are performed. Optimal parameters from these statistical approaches are converged to 110 A, 19 V and 3 cm/min, respectively. It is deduced from this study that the optimal parameters are convergent irrespective of the two used techniques for the investigated experimental data.

There is an increasing demand for materials having higher strength-to-weight ratio especially used for space applications. Therefore, aluminium alloys were the one of the most suitable substitutes for ferrous alloys due to their high strength and light weight characteristics. In 2017, aluminium production has increased by 5.8% worldwide. Al 6061 is a widely used alloy material for the production of aerospace, aircraft and gas turbine components. Al 6061 pipes have also been used for a broad range of applications, but they usually exhibit poor corrosion resistance properties.

In high strength aluminium pipe AA6061-T3, the second phase particles contribute to precipitation hardening but it can also induce susceptibility to localized corrosion [1, 2, 3, 4]. In turn, the localized corrosion induced by microstructural heterogeneity leads to corrosion-assisted fatigue cracking or stress corrosion cracking [5, 6]. Stress corrosion cracking usually results in premature failure. The combined effect of corrosive environment and stress accelerates the crack growth leading to reduced life of the components [7, 8]. Localized corrosion causes deterioration in service to aluminium alloy components. This is one of the reasons for initiating fatigue cracking under alternating or constant tension [9, 10, 11]. The cracks developed as a result propagate under severe load, and the fracture toughness of the welded material gets adversely affected [12, 13, 14, 15, 16, 17, 18]. Unfortunately, various element additions for increased mechanical performance, easiness of processing and application stability create sites susceptible to localized corrosion [19]. Internal corrosion of aluminium pipelines is a common and serious problem in irrigation systems, which are designed for long-term operation. It involves an interaction between the flowing fluids and the metal wall. This problem has caused the consideration of many corrosion control programmes and research in various water fields around the world. Joining of pipelines in irrigation systems has usually threaded joints. On the other hand, if high pressure is present, welding techniques are rather used. Generally, it is difficult for aluminium alloys to be fusion welded and even it is not recommended at all for specific ranges of aluminium alloy groups. Also, the welding types have a crucial effect on the mechanical and metallurgical properties of the joints [20]. Novel techniques are suggested in such cases to join using the friction stir welding process [21, 22, 23]. Parameters play a crucial role in the case of friction stir welding [24]. Weld porosity and slag inclusion defects are formed due to the rapid oxidation during the fusion welding [25]. These defects have a great reduction effect of the mechanical properties of welded joints [26, 27, 28]. Commercial aluminium alloys have an additional demerit to be fusion welded. They have a protective hard adhered oxide film on the surface. That leads to an extensive surface treatment for the disposal of such film before welding. The diffused coatings laid over the surface to protect the tubes can be depleted during welding. In addition, welding introduces microstructural and compositional heterogeneities which can lead to significantly increased corrosion. In metal inert gas (MIG) welding, there is no uniform corrosion resistance of the welded joint at different zones and also joints are merely sensitive to corrosion. Furthermore, 78% [29] of corrosion damage sites have been identified in the welded region and found to have initiated fatigue cracks. As a result, welding of aluminium and its alloys considering the final corrosion rate of the joint is challenging, especially if the joint is in a piping system for irrigation.

The mechanical properties of the final welded joint are affected by various parameters such as voltage, current, travel speed, wire feed rate and electrode thickness. Welding speed is a dominant variable in changing the welded joint’s mechanical properties [30]. The effect of welding speed on the Al 6081 joint’s fatigue strength was studied especially in the friction stir welding process. Also, the results obtained were compared with those acquired by MIG-pulse and tungsten inert gas (TIG) welding processes. However, lowering the value of welding speed significantly increased the fatigue strength of MIG-pulse and TIG-welded joints. Also, the joint welded by MIG-pulse process has the lowest value of fatigue strength compared to the friction stir welds (FSW) and TIG welds [31]. In MIG welding, the accurate filler metal selection is one of the most substantial factors to consider. Its deposit chemistry with the shielding gas determines the final mechanical properties of the weld. Si-rich filler metal—ER-4043 and MG-rich filler metal—ER-5356 are the most widely used filler metals for welding Al 6061 joints. Rajesh Verma [32] studied the effect of ER4043 and ER5356 filler wire on mechanical properties and microstructure of dissimilar aluminium alloys, 5083-O and 6061-T6 joints, welded by the inert metal gas welding process. The hot crack which is one of the defects developed during MIG welding mainly depends on filler composition and mitigation. Si-rich filler metals such as ER-4043 were found to be more effective to reduce hot cracks in Al 6061 welds [32]. It is more efficient than using Mg-rich filler metals such as ER5356 where longitudinal cracks were observed in the latter [33]. Also, ER-4043 is useful in minimizing the brittle intermetallic compound layer and preventing its build-up [34]. ER-4047 filler can be used as an alternative of ER-4043 as it showed a competitive output quality for welding Al 6061 [34]. However, it is unusual to be familiar with the possessions of alternative filler metals like ER4047 on the Al 6061 welds.

Subsequently, to solve multiple objective problems, several techniques are available such as grey relational analysis (GRA) and Technique for Order priority through resemblance to Ideal Solution (TOPSIS) [35]. GRA is based on grey system theory, suitable for solving problems with the complex relationship between several factors and variables. GRA can be utilized for solving various types of multi-attribute decision-making problems such as power allocation, quality amelioration and resource exploitation in the industry [36]. GRA solves the multi-attribute problem by collecting all the attribute values into a single value; thus, the multi-objective problem is transformed into a single objective problem [37]. Subsequently, the GRA decreases complexity in decision-making and increases the adequacy of the system [38]. Hsuan-Liang Lin [39] optimized the process parameters of MIG welding utilizing GRA style. In that work, the depth to width ratio of weld bead at two various stipulations has been optimized by converting the problem into a single objective. Hsiao et al. [17] solved the multi-objective problem in plasma arc welding (PAW) to get better the quality of weld utilizing GRA. The grey relational grade was computed for responses such as root penetration, groove width and undercut and later used for optimizing the parameters using the Taguchi approach. However, statistical approaches used for optimizing the MIG welding parameters for welding Al 6061 pipes are rare. Welding of pipes is preferred rather than flanges for those applications in which high pressure is exerted on the inner surface of the pipes.

Al 6061 pipes with a 30 mm outer diameter and 3 mm wall thickness were the coupons for gas metal arc welding. The chemical composition and mechanical properties of Al 6061 aluminium according to the datasheet provided by Miser Aluminum Company are given in Tables 1 and 2, respectively. The welding setup includes Trans Pulse Synergic 4000 power source, ER-4043 electrode wire and Al 6061 coupons. The chemical composition of the ER-4043 electrode is provided in Table 3.
Table 1

This research focusses on the effect of three important GMAW welding parameters namely welding current, voltage and travel speed on the tensile strength and corrosion rate. Therefore, three factors with three levels are considered for the statistical analysis using ANOVA and GRA. The upper and lower limits of the three factors are obtained from the preliminary trials and previous studies. The parameter range was set in such a way that the final welded joint has no defects upon visual inspection. The GMAW process parameters and their limits are presented in Table 4. A welded AA 6061 pipe using the MIG process is demonstrated in Fig. 1.
Table 4

MIG process parameters and their limits in metal inert gas

Cell current readings were taken during a short, slow sweep of the potential. The sweep was taken from (− 100 to 100) mV relative to open circuit potential (OCP). The scan rate defines the speed of the possible sweep in mV/sec and (10) mv. The tests were carried out using a multi-channel WENKING Mlab potentiostat and a corrosion measuring system SCI-Mlab (from Bank Electronics-Intelligent Control GmbH, Germany 2007). A saturated calomel electrode was submerged in the salt solution as a working electrode (WE) and aluminium 6061 samples were the counter electrodes. Tafel’s electrochemical corrosion test was performed using samples in 3.5% sodium chloride solution, NaCl with Ph of 6.8 and tap water with Ph of 8.2. The corrosion parameters such as corrosion potential (Ecorr) and corrosion current (Icorr) at each shot was determined. For each specimen, the corrosion rate was examined and the current corrosion weight was obtained by extrapolation.

Tensile test specimens were prepared as per ASTM E8 standard (See Fig. 2). Three samples were tested for each set of parameters (See Table 4), and the average values of the results were obtained.

In GRA, all the response values are normalized between 0 and 1 for simple interpretation and analysis. These normalized values are utilized to calculate the grey relational (GR) coefficient. Following, the grey relational grade for every experimental trial is calculated by averaging the GR coefficient. The ranking based on the responses of the experimental trial depends on GR grade (GRG). The higher GR grade corresponds to the optimal set of parameters and will be ranked as 1. The ranking based on GRG is explained step by step.

Statistics of main effect and interaction effect on tensile strength

Mean closeness coefficient of each parameter at every level

Metal inert gas welding process was effectively used for joining aluminium pipes. The process parameters were found to be significant factors affecting tensile strength. Therefore, optimization of parameters is important to achieve strengthened joint. The analysis results by conducting ANOVA and GRA are provided below.

We would like to acknowledge the fund provided by the United Arab Emirates University through the grant number 31R105-Research center.